He speculates an Eichel trade could happen after the July 21 expansion draft. Possible destinations could include the Anaheim Ducks, Calgary Flames, Minnesota Wild and Vegas Golden Knights, with the Boston Bruins, New York Rangers and perhaps the Los Angeles Kings on the periphery.

SPECTOR’S NOTE: The Ducks, Rangers and Kings have plenty of promising assets and the cap space to swing a deal for Eichel. Whether they’re willing to pay the hefty price in terms of his expensive contract and the return to the Sabres (an equivalent of four first-rounders) is another story. The ongoing uncertainty over his neck injury remains a serious sticking point for every potential suitor.

The Athletic’s Michael Russo reported last month the Wild had preliminary talks with the Sabres. He indicated general manager Bill Guerin could be reluctant to mortgage his club’s future. Guerin also has to get Kirill Kaprizov and Kevin Fiala under contract.

Cap space isn’t an issue for the Bruins but their focus is on adding a top-four, left-side defenseman. They’re in talks with pending UFA winger Taylor Hall and could bring back Tuukka Rask and David Krejci on short-term deals for one more run at the Stanley Cup. They also don’t have enough tradeable assets to meet the Sabres’ high asking price.

Absorbing Eichel’s $10 million annual cap hit would be a problem for the Flames and Golden Knights. Like the Bruins, they lack sufficient depth in promising assets to outbid the others on Friedman’s list.

I’m not saying Eichel won’t be traded or won’t end up on one of those teams. I’m merely pointing out that it’s going to take considerable work to pull it off, especially if the Sabres are reluctant to lower their asking price or absorb a portion of his salary. 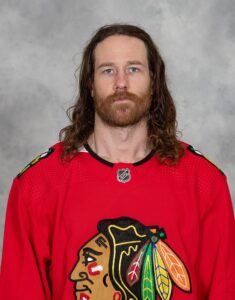 SPORTSNET: Elliotte Friedman reports the Chicago Blackhawks and Edmonton Oilers are reaching a point of “Does it happen or not” regarding a Duncan Keith trade. The Oilers have rejected most of what the Blackhawks sought in return, which may have include Ethan Bear and/or Ryan McLeod.

DAILY FACEOFF: Frank Seravalli said the Blackhawks don’t want to retain any portion of Keith’s $5.53 million annual cap hit. The Oilers’ interest has waned and they’ve pulled back on the assets they were willing to send to Chicago in return. Seravalli believes Caleb Jones was part of it. He also said the Oilers have tabled a “take it or leave it” offer and there’s only a certain price they’ll pay if the Blackhawks won’t retain salary.

SPECTOR’S NOTE: Looks like Oilers general manager Ken Holland is taking a firm approach here. He’s under no pressure to acquire Keith. The Oilers could use a second-pairing left-side defenseman but they can find more affordable options if the Hawks won’t retain salary. There’s also no indication the Hawks will take on someone like James Neal or Mikko Koskinen for the purpose of buying them out. If the Blackhawks won’t bend, this deal falls apart.

The Philadelphia Flyers and Jakub Voracek have discussed that it might be time for a change. The 31-year-old winger was told he’ll be left unprotected in the upcoming expansion draft.

If the Seattle Kraken doesn’t select him, the Flyers will look elsewhere. Voracek has three years remaining on his contract with an annual average value of $8.25 million. There’s also a chance they can’t move him via trade and he stays put.

Friedman also reported the Seth Jones-to-Philadelphia trade discussions are off for now. They can’t get the commitment they want from the Columbus Blue Jackets defenseman.

SPECTOR’S NOTE: Voracek’s still an effective top-six winger. He lacks no-trade protection but his cap hit will dampen his trade value unless the Flyers pick up part of it or take back an equivalent salary. Perhaps a three-team deal can be made involving draft picks to spread that cap hit around.

If Jones is unwilling to sign an extension with an acquiring team it could kill his value in the trade market. Teams are definitely interested but they don’t want to part with assets on a player who could depart next summer as a free agent.

Friedman wondered if the Carolina Hurricanes will qualify the rights of goaltender Alex Nedeljkovic over concerns of what he might get via arbitration. Same thing with winger Warren Foegele.

SPECTOR’S NOTE: If the Hurricanes don’t qualify their rights they become unrestricted free agents on July 28. They would lose both players to other teams for nothing, though they’d probably try to trade them before then. Nedeljkovic was a finalist for the Calder Memorial Trophy and would draw considerable attention in the UFA market.

Friedman took note of Montreal Canadiens general manager Marc Bergevin acknowledging how tough the past year was for him mentally and his intention to honor the final year of his contract. He wondered if Bergevin might move into a President of Hockey Operations role with the Canadiens after next season while Scott Mellanby or Martin Lapointe takes over as GM.

Canadiens center Phillip Danault confirmed turning down a long-term extension prior to this season. Friedman believes the two sides were $500K to $750K per season apart. Bergevin indicated he hopes Danault remains with the team.

SPECTOR’S NOTE: The statuses of Bergevin and Danault will be the hot topics for the Montreal media in the coming weeks. Danault is slated to become an unrestricted free agent on July 28. It’ll be interesting to see if the Canadiens increase their previous six-year, $30 million offer or if Danault will test the market.

The Toronto Maple Leafs had an interest in Detroit’s Tyler Bertuzzi until the 26-year-old left winger suffered a season-ending injury. Pending UFA winger Zach Hyman probably won’t be back with the Leafs. The Red Wings could be among Hyman’s suitors.

SPECTOR’S NOTE: Perhaps the Leafs will revisit that interest in Bertuzzi if he’s fully recovered from his back surgery. He is a restricted free agent who exceeded 45 points in consecutive seasons prior to this year. He’ll be costly to the Leafs in terms of salary and return to the Wings if the latter intends to part with him.

Teams are showing interest in Arizona Coyotes center Christian Dvorak. He’s under contract for four more years with an AAV of $4.45 million.

Friedman wouldn’t be surprised if the Los Angeles Kings attempted to land a winger such as Colorado’s Brandon Saad or St. Louis’ Jaden Schwartz.

SPECTOR’S NOTE: The Kings were in the market for two top-six wingers in the trade market, preferably in their late-20s with some term left on their contracts. Saad and Schwartz are in the right age group but they’re due to become UFAs by July 28. The Kings might be interested but perhaps on deals for no more than four years.

The Blues could go after Gabriel Landeskog if he hits the open market and they trade Vladimir Tarasenko. Friedman thinks Landeskog will stay with the Colorado Avalanche.

There will be plenty of interest in Tampa Bay Lightning UFA forwards Blake Coleman and Barclay Goodrow.

← NHL Morning Coffee Headlines - July 10, 2021 NHL Morning Coffee Headlines - July 11, 2021 →
We use cookies on our website to give you the most relevant experience by remembering your preferences and repeat visits. By clicking “Accept”, you consent to the use of ALL the cookies.
Do not sell my personal information.
Cookie SettingsAccept
Manage consent