SPECTOR’S NOTE: The Wild’s buyouts of Zach Parise and Ryan Suter were reported yesterday. You can read my take here.

THE TENNESSEAN: Pekka Rinne announced his retirement yesterday. A three-time All-Star, the 38-year-old goaltender spent his entire 15-season NHL career with the Nashville Predators, winning the Vezina Trophy in 2018, backstopping the franchise to its only Stanley Cup Final appearance. 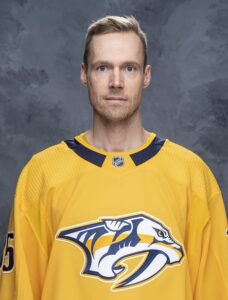 SPECTOR’S NOTE: Rinne had a remarkable NHL career. He holds several Predators single-season records (43 wins, .930 save percentage, 2.12 goals-against average, eight shutouts) and is their career leader in wins (369), shutouts (60) and goals-against average (2.43). Those stats could get him into the Hockey Hall of Fame one day.

NHL.COM: The Montreal Canadiens announced Dominique Ducharme is their full-time head coach, signing him to a three-year contract.

SPECTOR’S NOTE: It was a tale of two seasons for Ducharme. Injuries to key players, a grueling second-half schedule (25 games in 44 days) following a COVID-19 outbreak and limited practice time made it difficult for him to implement his system, prompting questions over his readiness to become a full-time NHL bench boss.

The Canadiens’ surprising run to the Stanley Cup Final changed that perception. It’ll be interesting to see how he manages the heightened expectations over the course of a full schedule next season with the Bell Centre full of fans.

NBC SPORTS: The Tampa Bay Lightning finally revealed which players were dealing with serious injuries during the 2021 playoffs. Victor Hedman will require surgery to repair a knee injury suffered in March. His expected recovery time is two-to-four weeks. Nikita Kucherov suffered a fractured rib in the semifinal against the New York Islanders, requiring him to wear a flak jacket and undergo pain-blocking injections.

Ryan McDonagh and Barclay Goodrow suffered broken hands. Alex Killorn suffered a broken fibula that sidelined him for most of the Final.

TSN: Colorado Avalanche defenseman Erik Johnson has waived his no-movement clause to allow himself to be exposed in next week’s expansion draft.

SPECTOR’S NOTE: This will provide the Avalanche the flexibility to protect a defenseman they otherwise risked losing in the expansion draft. It’s unlikely the Seattle Kraken will select Johnson, who missed most of this season to injury. He’s signed through 2022-23 with an annual average value of $6 million and a modified no-trade clause.

The deadline for teams to request a player to waive their NMCs to be exposed in the expansion draft was yesterday at 5 pm ET. Those players will have until Friday to reach a decision.

SEATTLE TIMES: The Kraken’s expansion draft will be held next Wednesday on an outdoor stage at Gas Works Park with fans in attendance.

Sopel hopes more players from that team will speak out about what they were told about Aldrich. He understands the difficulty some of them feel as they’re either still playing with the club or employed by the team in other capacities.

SPECTOR’S NOTE: Sopel is the first player from that roster to publicly claim there was wide knowledge of those allegations. Former Blackhawks head coach Joel Quenneville issued a statement denying he had prior knowledge of those allegations, insisting he first learned about them through the media earlier this spring. He’s offered to participate in the Blackhawks’ investigation into those claims.

TSN: Former NHL forward Jordan Weal has signed a two-year contract with KHL club AK Bars Kazan. He last played in the NHL in 2019-20 with the Montreal Canadiens and spent this season with their AHL affiliate in Laval. Weal previously played with the Los Angeles Kings, Philadelphia Flyers and Arizona Coyotes.

← Wild To Buy Out Parise and Suter NHL Rumor Mill - July 14, 2021 →
We use cookies on our website to give you the most relevant experience by remembering your preferences and repeat visits. By clicking “Accept”, you consent to the use of ALL the cookies.
Do not sell my personal information.
Cookie SettingsAccept
Manage consent