Wild To Buy Out Parise and Suter 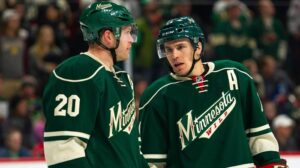 Ryan Suter (left) and Zach Parise bought out by the Minnesota Wild (NHL.com).

SPECTOR’S NOTE: Former Wild general manager Chuck Fletcher signed Parise and Suter to identical 13-year, $98 million contracts on July 4, 2012. Those deals were heralded at the time as the start of the Wild’s push to become Stanley Cup contenders.

The duo played well for much of their tenures in Minnesota. Parise had 199 goals and 400 points in 558 games during the past nine seasons while Suter had 55 goals and 369 points in 656 contests. The Wild reached the playoffs during their first six seasons but failed to advance past the second round.

As time went on and Parise and Suter aged, those contracts became more burdensome against the Wild’s cap payroll as their performances inevitably began to decline. With younger players garnering more playing time and responsibilities, Guerin needed to ensure he wouldn’t lose one of them in the upcoming expansion draft. He also wanted to free up salary-cap space to re-sign such notables as Kirill Kaprizov and Kevin Fiala and perhaps make additions via trades or free agency.

Parise and Suter will become unrestricted free agents. Each could become affordable short-term options for playoff contenders looking to add experience and leadership to their lineups.

← NHL Rumor Mill - July 13, 2021 NHL Morning Coffee Headlines - July 14, 2021 →
We use cookies on our website to give you the most relevant experience by remembering your preferences and repeat visits. By clicking “Accept”, you consent to the use of ALL the cookies.
Do not sell my personal information.
Cookie SettingsAccept
Manage consent