Is The Coyotes’ Saga in Arizona Drawing To A Close?

​The city of Glendale’s decision to opt-out of its lease agreement for Gila River Arena with the Arizona Coyotes prompted speculation about the club’s future among fans and pundits.

Some observers, including NHL commissioner Gary Bettman, think this is merely a bluff by the city of Glendale to secure a better lease agreement from the Coyotes. That doesn’t appear to be the case. After years of late or delinquent payments, the city council seems to have had enough. 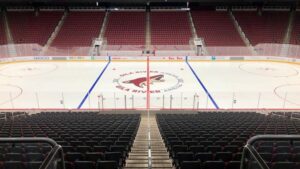 Coyotes owner Alex Meruelo has explored constructing a new arena closer to downtown Phoenix for the past couple of years. There’s no indication the club is close to securing a viable location.

Barring a last-minute change of heart by Glendale’s city council, the Coyotes will be scrambling to find a new home for the 2022-23 season. Even if Meruelo finds a suitable spot for a new arena, it would take two or three seasons before it would be ready.

This is just the latest chapter in the long, sad saga of the Coyotes’ story since its original incarnation as the original Winnipeg Jets moved to Phoenix in 1996. A quarter-century of roster mismanagement, the move to Glendale, multiple owners, poor attendance and a culture of losing have turned this franchise into a league-wide laughingstock.

Despite the Coyotes’ woes, however, hockey is actually thriving in Arizona.

The Coyotes’ small but loyal fan base has stuck with the club through thick and mostly thin. The club has also played an ongoing role in sponsoring and developing youth hockey in the state.

Arizona is also producing NHL talent, with Toronto Maple Leafs superstar Auston Matthews the state’s most well-recognized player. In 2020, ESPN.com reported Matthews was having a positive effect on youth hockey in the state. He’s inspiring a young generation of Arizona players.

Meanwhile, several former NHL players who have retired around Phoenix have taken up coaching youth hockey in the area. The only drawback to hockey’s rapid growth in the state is the lack of suitable ice facilities to accommodate the growing number of players.

Nevertheless, the Coyotes critics will point to the club’s soap-opera existence and years of low attendance as justification to relocate the team. Some suggest moving to Houston, Texas, where Tilman Fertitta, owner of the NBA’s Houston Rockets, could still be keen to own an NHL franchise. Others propose a former NHL market such as Quebec City, or to a city such as Kansas City with an NHL-size arena.

Rest assured the NHL, led by commissioner Bettman, will pull out the stops to keep the Coyotes in Arizona just as it has since former owner Jerry Moyes put the team into bankruptcy in 2009.

Moyes hoped to sell the club to Canadian billionaire Jim Balsillie, who wanted to relocate the franchise to Hamilton, Ontario. The league went to court to prevent it from happening. It has since done all it can since to keep the club in Arizona.

The main reason, of course, is the market size. The metropolitan area of Phoenix is the 10th largest in the United States with over 4.9 million people as of 2019, one the NHL doesn’t want to abandon.

Houston’s market is over 2 million larger but the NHL already has a franchise in Texas. While the state of Texas is big enough to support two NHL teams, the Dallas Stars might not be keen to have a rival on its patch potentially siphoning away fans and dollars.

While the Coyotes will have the league’s full support, the franchise could now be in more real danger of moving than at any time in its history. If Meruelo fails to find a suitable temporary local venue while a new arena is built (assuming one will be constructed), the Coyotes will be forced to play out of state while they await their new home.

Bettman indicated Meruelo remains committed to a new arena, but that could be easier said than done. An in-depth report earlier this year by The Athletic’s Katie Strang revealed financial woes were among several issues plaguing the club.

Construction of a new arena won’t be funded solely by the Coyotes. Meruelo will likely seek the financial support of local and state governments. Those discussions probably haven’t even started yet and could founder if public officials decline to pick up a hefty chunk of the tab.

The NHL carried the Coyotes for years but it can’t keep them in Arizona without a suitable arena. If that’s not coming within the next two or three years, the club’s much-anticipated relocation could become a reality.

← Sunday NHL Rumor Roundup - August 22, 2021 NHL Morning Coffee Headlines - August 23, 2021 →
We use cookies on our website to give you the most relevant experience by remembering your preferences and repeat visits. By clicking “Accept”, you consent to the use of ALL the cookies.
Do not sell my personal information.
Cookie SettingsAccept
Manage consent