Evander Kane to be investigated that he bet on games, why Jack Eichel wants a disc replacement, plus a roundup of Saturday’s notable free-agent signings in today’s NHL morning coffee headlines.

NBC SPORTS BAY AREA: The NHL intends to launch an investigation into an allegation claiming San Jose Sharks winger Evander Kane gambled on NHL games. The Sharks also released a statement indicating its support for a full and transparent investigation. 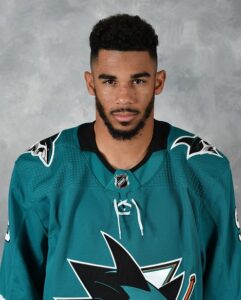 The allegation was raised on an unverified Instagram account attributed to Kane’s wife, Anna, claiming the winger abandoned her and their two children to go on a European vacation while their home was being repossessed. She then accused Kane of betting on his own games.

Kane, 29, was sued by a Las Vegas casino in 2019 over $500K in unpaid gambling debts but the suit was dropped the following year. In January, he filed for bankruptcy claiming nearly $27 million in debts, including $1.5 million in gambling losses. He’s also facing six active lawsuits from lenders.

SPECTOR’S NOTE: Kane’s bankruptcy and previous gambling issues are well-documented but his wife’s allegations raise that issue to an entirely different level. Sharks management stood by him during his bankruptcy. He recently claimed in an interview that fatherhood had changed and matured him. His wife’s comments, however, paint a very different picture.

Kane’s personal issues didn’t affect his on-ice performance as he led the Sharks in scoring this season with 49 points in 56 games. However, reports emerged indicating significant friction between the winger and his teammates this season, with several expressing frustration to management in their season-ending exit interviews.

Kane has four years remaining on his contract with an annual average value of $7 million. The outcome of this investigation, however, could determine whether he’ll get the opportunity to complete that contract.

SPORTSNET: Jeff Marek and Elliotte Friedman interviewed Colorado neurosurgeon Dr. Chad Prusmack, who provided Jack Eichel with a recommendation to correct a herniated disc in his neck with artificial disc replacement surgery. Prusmack explained the procedure, the risk and recovery and why it would be more beneficial than neck fusion surgery.

SPECTOR’S NOTE: Eichel and Sabres’ management are in disagreement over whether he can undergo this procedure. Under the CBA, the Sabres have the final say but that’s become an area of contention between the two sides, prompting considerable speculation over his future.

EDMONTON JOURNAL: The Oilers signed winger Warren Foegele to a three-year contract worth $2.75 million per season. Foegele was acquired last week from the Carolina Hurricanes

THE DETROIT NEWS: The Red Wings re-signed winger Tyler Bertuzzi to a two-year contract worth $9.5 million. Bertuzzi has resumed off-ice training following back surgery in April and is expected to be ready for training camp next month.

TORONTO SUN: The Maple Leafs signed Nick Ritchie to a two-year contract worth $2.5 million per season.

← NHL Rumor Mill - July 31, 2021 Sunday NHL Rumor Roundup - August 1, 2021 →
We use cookies on our website to give you the most relevant experience by remembering your preferences and repeat visits. By clicking “Accept”, you consent to the use of ALL the cookies.
Do not sell my personal information.
Cookie SettingsAccept
Manage consent