Updated salary arbitration schedule including the latest on Kevin Fiala, the Sharks sign William Eklund, plus the latest speculation on the Flames and Oilers in today’s NHL morning headlines and rumors.

CAP FRIENDLY: Only five of 20 cases remain in this summer’s NHL arbitration schedule. 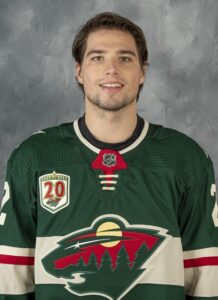 SPORTSNET’s Elliotte Friedman reports Fiala seeks $6.25 million while the Wild are countering with $4 million. THE ATHLETIC’s Michael Russo tweeted Fiala chose a one-year contract. If the arbiter awards him that, he’ll be a restricted free agent again next summer.

SPECTOR’S NOTE: All cases thus far have been settled without going before an arbiter. The remainder could go the same route.

THE DETROIT NEWS: The Red Wings avoided arbitration with Adam Erne, reaching an agreement on a two-year, $4.2 million contract.

PUCKPEDIA.COM: The San Jose Sharks signed William Eklund to a three-year, entry-level contract. The 18-year-old forward was the seventh overall pick in the 2021 NHL Draft.

SPECTOR’S NOTE: As with the other 2021 picks signed to entry-level contracts, those deals will slide forward to next season if they play outside the NHL this season. Eklund could get a taste of action with the Sharks if he performs well in training camp. They could also play him in nine NHL games without burning the first year of his contract.

THE ATHLETIC: In a recent mailbag segment, Hailey Salvian was asked if other moves could be in store for the Calgary Flames. She feels they still have some obvious holes on the defense, especially on the right side. They could consider going the trade or free-agent route or look within their system to address that issue.

Asked if the Flames could make a big move, Salvian believes they’re not done and there’s plenty of time remaining in the offseason. They’ve been linked to Buffalo’s Jack Eichel and St. Louis’s Vladimir Tarasenko. She also wondered if they might shop Sean Monahan or perhaps attempt to pry Christian Dvorak away from the Arizona Coyotes.

I don’t see the Flames winning the Eichel sweepstakes. Treliving shot down speculation of a Tarasenko-for-Matthew Tkachuk swap. Monahan’s 10-team no-trade clause is a stumbling block in any attempt to move him. Meanwhile, the Coyotes seem reluctant to move Dvorak unless a club is willing to overpay for his services.

Treliving could be keen to make another significant move and he still could pull it off. However, he could be finding suitable deals difficult to come by.

EDMONTON JOURNAL: Kurt Leavins speculates the Oilers could use a professional tryout offer route as training camp approaches to add an experienced No. 4 defenseman with a right-hand shot. He suggested Michael Stone or Sami Vatanen as possible options.

← Sunday NHL Rumor Roundup - August 15, 2021 NHL Morning Coffee Headlines - August 17, 2021 →
We use cookies on our website to give you the most relevant experience by remembering your preferences and repeat visits. By clicking “Accept”, you consent to the use of ALL the cookies.
Do not sell my personal information.
Cookie SettingsAccept
Manage consent