Could the Blues have an interest in an Islanders defenseman? Could the Devils use another forward? Check out the latest in today’s NHL rumor mill.

THE ATHLETIC: Jeremy Rutherford reports New York Islanders defenseman Scott Mayfield has surfaced as a possible trade target for the St. Louis Blues. A St. Louis native, the 28-year-old Mayfield could be a fit on the right side of the Blues’ third defense pairing. 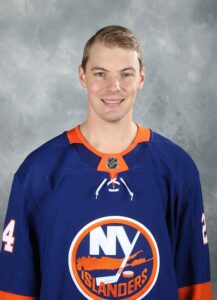 Rutherford noted the Islanders were among the teams tied to the Vladimir Tarasenko trade rumors. He wondered if a potential swap for the left wing might bring Mayfield home.

SPECTOR’S NOTE: Anything’s possible but I don’t think the Isles intend to trade another defenseman. NHL.com’s Brian Compton believes they still need to replace Nick Leddy after trading him last month to the Detroit Red Wings in a cost-cutting move.

Compton also acknowledged the Isles could use another scorer, which would explain why they’ve been linked to Tarasenko. Mayfield on his own won’t get it done but he could be part of a package offer including a quality draft pick and/or prospect. However, I don’t see them moving him before addressing Leddy’s absence.

SPECTOR’S NOTE: Speaking of Tarasenko, would Devils general manager Tom Fitzgerald consider taking him on? The 29-year-old winger is signed through 2022-23 and is said to be willing to waive his no-trade clause to go just about anywhere. He could provide a big boost to their production if he’s fully recovered from his shoulder surgeries.

Cap Friendly indicates the club has over $12 million in cap space, more than enough room to absorb the winger’s $7.5 million annual cap. They’ve also got plenty of promising young assets within their system to draw upon for trade bait.

← NHL Morning Coffee Headlines - August 20, 2021 NHL Morning Coffee Headlines - August 21, 2021 →
We use cookies on our website to give you the most relevant experience by remembering your preferences and repeat visits. By clicking “Accept”, you consent to the use of ALL the cookies.
Do not sell my personal information.
Cookie SettingsAccept
Manage consent