Jets GM Cheveldayoff won’t be disciplined by the league regarding the Blackhawks scandal, NHLPA director Fehr faces criticism related to the scandal, the Leafs sign Rielly to a contract extension, and much more in today’s NHL morning coffee headlines.

NHL.COM: The league announced yesterday it will not impose discipline on Winnipeg Jets general manager Kevin Cheveldayoff regarding improper decisions made by the Chicago Blackhawks organization regarding sexual assault allegations against former video coach Bradley Aldrich in 2010. Cheveldayoff was the Blackhawks assistant GM during that time. The decision came following Cheveldayoff’s meeting on Friday with league commissioner Gary Bettman in New York. 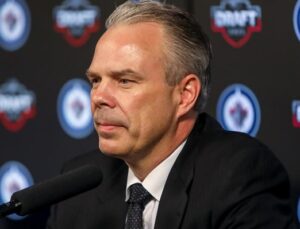 Bettman released a statement pointing out Cheveldayoff was not a member of the Blackhawks senior management in 2010 and thus couldn’t assign responsibility upon him for the club’s handling of the matter. The commissioner indicated Cheveldayoff’s degree of involvement was limited to one meeting and found he was “extremely forthcoming and credible in our discussion.”

The statement went on to note Cheveldayoff’s role within the organization at the time left him without authority to make appropriate organizational decisions on the matter. “In short, Cheveldayoff was not a participant in either the formulation or execution of the club’s response”.

TSN: Cheveldayoff released a statement following the meeting through the Jets’ website. He expressed his support and empathy for Kyle Beach (the victim of Aldrich’s alleged assaults) and praised his courage. He also thanked the league for allowing him the opportunity to meet with Bettman and provide his side of the story.

SPECTOR’S NOTE: Cheveldayoff may have been cleared by the league but he still faces scrutiny from Winnipeg pundits and fans. Sportsnet’s Ken Wiebe and the Winnipeg Sun’s Scott Stinson believe the Jets GM owes Beach an apology, something that was absent from his statement. The Sun’s Scott Billeck and Mike McIntyre of the Winnipeg Free Press believe Cheveldayoff owes an explanation to fans and media.

TSN: NHLPA director Donald Fehr is facing criticism after Kyle Beach revealed a lack of support from the association when he and his agent, Ross Gurney, informed them of the details of his alleged assault by Aldrich.

Gurney said he spoke to Fehr directly in 2011 about his concerns regarding Aldrich, who was working with USA Hockey at that time. “My purpose in calling the PA was to get a warning to USA Hockey,” he said. “That is what I was directed to do by Kyle”. He said Fehr told him he knew people at USA Hockey and the PA would look into the matter and offer support.

Beach was referred to Dr. Brian Shaw, a psychologist and program director within the NHL/NHLPA Player Assistance Program. He said Shaw told him the PA would handle it but never heard from them again.

SPECTOR’S NOTE: Daily Faceoff’s Frank Seravalli reports Fehr is facing waning support among PA staff and is under fire externally following the results from the independent investigation and Beach’s interview on Wednesday. Seravalli pointed out the player-led Executive Board has the authority to oust Fehr as PA director. He said it’s unclear if the 32 members will move to conduct an inquiry or pressure Fehr into resigning.

ESPN.COM: The Chicago Blackhawks sent a request to the Hockey Hall of Fame to have Aldrich’s name removed from the Stanley Cup. The Hall issued a statement saying HHOF chairman Lanny McDonald, league commissioner Bettman and deputy commissioner Bill Daly are on board with the request. Discussions are underway with the Stanley Cup trustees to make this happen.

NHL.COM: The Florida Panthers extended their season-opening win streak to eight games with a 3-2 overtime victory over the Detroit Red Wings. Aleksander Barkov scored twice, including the game-winner. The Panthers had a 2-0 lead but the Wings rallied on goals by Sam Gagner and Pius Suter.

The Carolina Hurricanes set a franchise record with a season-opening seventh straight win by dropping the Chicago Blackhawks 6-3. Tony DeAngelo had a goal and two assists for the Hurricanes. Blackhawks forward Tyler Johnson left the game after being crosschecked by Hurricanes center Vincent Trocheck.

The Vegas Golden Knights blew a 4-1 lead but went on to defeat the Anaheim Ducks 5-4 on a shootout goal by Evgenii Dadonov. Ducks captain Ryan Getzlaf collected an assist to tie Teemu Selanne as the franchise’s leading scorer with 988 points. The Ducks also placed winger Rickard Rakell on injured reserve with a shoulder injury suffered during Thursday’s game against the Buffalo Sabres.

A 31-save shutout by Igor Shesterkin carried the New York Rangers over the Columbus Blue Jackets 4-0. Chris Kreider scored two power-play goals while Artemi Panarin and Adam Fox each had three assists.

The Ottawa Senators snapped a three-game losing skid by dropping the Dallas Stars 4-1. Josh Norris tallied twice, Brady Tkachuk netted his first goal of the season and Filip Gustavsson kicked out 38 shots for the win.

SPECTOR’S NOTE: The good news is the Leafs have their best defenseman under a new long-term deal at a cap hit lower than what he would’ve received on the open market next summer. Given the big contracts signed this summer by other notable blueliners, speculation suggested it would cost the Leafs around $8.5 million to keep him in the fold. Rielly left some money on the table to stay in Toronto.

DETROIT HOCKEY NOW: Steve Carlson, who played one of the Hanson Brothers in the movie “Slap Shot”, has been diagnosed with a form of cancer known as Stage IV metastatic squamous cell carcinoma. A GoFundMe page has been set up to help him with living costs while he undergoes radiation therapy.

SPECTOR’S NOTE: Best wishes to Carlson. Follow this link if you’d like to contribute to this fundraiser.