GOPHXN.COM: Craig Morgan reports it’s no secret Phil Kessel wants to be traded. He also indicated the Arizona Coyotes are “working feverishly to grant his wish.” 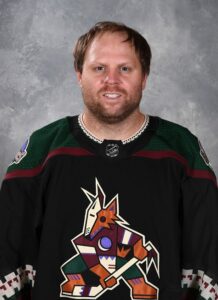 Kessel missed all of the preseason but was “largely unnoticeable” during the Coyotes’ season-opening loss to Columbus. Head coach Andre Tourigny noted the 34-year-old winger was behind his teammates in that game because of his absence from the preseason with an injured foot. “Phil’s track record speaks for itself,” he said, indicating his staff intends to give him some slack as he adjusts to their new system.

SPECTOR’S NOTE: Once Kessel gets his game up to speed he should have good value in the trade market closer to the March 21 trade deadline. Most teams currently can’t afford to take on the $6.8 million of his $8 million salary-cap hit that the Coyotes carry unless they’re willing to retain a healthy chunk of it to facilitate a trade.

THE ATHLETIC: Mark Lazerus believes Dylan Strome won’t be with the Chicago Blackhawks for much longer. He’s now their 14th forward and they can’t send him to the minors because they know he won’t clear waivers.

The 24-year-old center can’t seem to crack the lineup with Jonathan Toews and Tyler Johnson in the way. Head coach Jeremy Colliton lacks faith in his defensive game to put him in a bottom-six role.

Blackhawks management is listening to trade offers for Strome, which they’ve been doing since last season’s trade deadline. Lazerus, however, believes they should retain him as insurance in case something happens with Toews or Dach.

SPECTOR’S NOTE: A lot could also depend on the Blackhawks’ performance through the early going. They could hang onto Strome if they continue playing as poorly as they did through their first three games, inserting him into the lineup to shake things up. If they turn things around while he remains a healthy scratch, that could make it easier for management to ship him out.

NEW YORK POST: Mollie Walker reports Rangers winger Vitali Kravtsov has returned to Russia after refusing to report to their AHL affiliate in Hartford last week. It appears the Rangers are seeking a trade for the 21-year-old forward, who was also unhappy over where he’s been playing in the lineup during his brief tenure with the Blueshirts. Head coach Gerard Gallant said general manager Chris Drury is in regular contact with Kravtsov’s agent.

SPECTOR’S NOTE: Had Kravtsov accepted the assignment to Hartford he’d be back in the Rangers’ lineup now because of the recent injury to second-line right wing Kaapo Kakko. Speculation suggests the Rangers could seek a second-round pick for him in the trade market.

← NHL Morning Coffee Headlines - October 18, 2021 NHL Morning Coffee Headlines - October 19, 2021 →
We use cookies on our website to give you the most relevant experience by remembering your preferences and repeat visits. By clicking “Accept”, you consent to the use of ALL the cookies.
Do not sell my personal information.
Cookie SettingsAccept
Manage consent