​Looking ahead at how much the Bruins’ Charlie McAvoy will get on his next contract and the latest on the Blue Jackets’ Joonas Korpisalo in today’s NHL rumor mill.

BOSTON HOCKEY NOW: Jimmy Murphy recently reported Charlie McAvoy is putting his focus on this season but the 23-year-old Bruins defenseman knows he’s got a big payday coming. A restricted free agent with arbitration rights next summer, he’s in the final season of a three-year deal with an annual average value of $4.9 million. 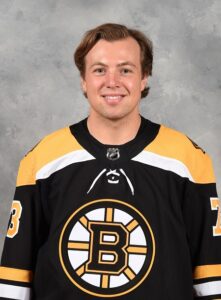 McAvoy took note of the comparable defensemen who signed lucrative long-term contracts this summer. He said they were well-deserved and he was happy for them.

SPECTOR’S NOTE: McAvoy is going to get a big raise on a long-term contract coming off his bridge deal. Murphy believes he’ll come into negotiations with a minimum $9 million as his starting point.

McAvoy’s new deal will take a big bite out of the Bruins’ cap space for 2022-23. Cap Friendly shows them with a projected $60.9 million committed to 18 players with Patrice Bergeron slated to become an unrestricted free agent and Jake DeBrusk also a restricted free agent with arbitration rights.

With the cap rising by $1 million for next season to $82 million, McAvoy’s new contract could affect other negotiations. It could also impact whatever plans the Bruins could have to address roster weaknesses via trades or free agency.

“It was super because I had no idea about that,” said Korpisalo. “It’s business. But frankly, I don’t give a (expletive) what happened. I’m still going to do me. It’s still the same team, still the same guys. It’s good to be here and I’m going to push with everything I can.”

The two goaltenders maintain a good relationship but Hedger feels Korpisalo’s days with the Jackets are numbered. Both want to be starters but the Blue Jackets have committed long-term to Merzlikins, though management and the coaching staff insist the caliber of their play will determine playing time this season.

SPECTOR’S NOTE: Korpisalo is due to become an unrestricted free agent next summer. Even if he outplays Merzlikins this season I don’t see the Jackets retaining him if they’re out of playoff contention by the March trade deadline. If anything, a strong performance by Korpisalo will make him more enticing to rival clubs seeking an upgrade between the pipes.

← NHL Morning Coffee Headlines - October 2, 2021 NHL Morning Coffee Headlines - October 3, 2021 →
We use cookies on our website to give you the most relevant experience by remembering your preferences and repeat visits. By clicking “Accept”, you consent to the use of ALL the cookies.
Do not sell my personal information.
Cookie SettingsAccept
Manage consent