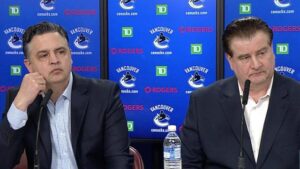 Bruce Boudreau takes over as head coach on a two-year contract. Stan Smyl replaces Benning on an interim basis as the club begins its search for a full-time replacement.

SPECTOR’S NOTE: Team owner Francesco Aquilini reportedly decided to remain patient with the club following a meeting with Benning last month. What likely spurred Aquilini to clean house was their 4-1 loss on Saturday to the Pittsburgh Penguins in which a fan tossed a jersey on the ice in the third period as others chanted “Fire Benning”.

That frustration among Canucks fans has been building for some time. The club reached the playoffs only twice in the past seven years under Benning’s management.

They seemed to be on the rise in 2019-20, coming within one game of reaching the Western Conference Final. A poor start and a COVID-19 outbreak scuttled their 2020-21 campaign. Things didn’t get any better this season despite a healthier roster, the additions of Oliver Ekman-Larsson and Conor Garland and the re-signing of core players Elias Pettersson and Quinn Hughes.

It’ll be interesting to see how the Canucks respond to Boudreau’s coaching. He’s an experienced NHL bench boss who’s had success in turning struggling or rebuilding clubs into playoff contenders. He faces a daunting challenge this season. With 18 points in 25 games, the Canucks are nine points out of a wild-card berth in the Western Conference.

SPECTOR’S NOTE: Vigneault was on increasingly thin ice as the Flyers dropped their last eight games. Last night’s lifeless 7-1 shellacking at the hands of the Tampa Bay Lightning was the last straw for general manager Chuck Fletcher.

NHL.COM: Winnipeg Jets captain Blake Wheeler celebrated his 1,000th career game with two assists in a 6-3 win over the Toronto Maple Leafs. Mark Scheifele, Kyle Connor and Pierre-Luc Dubois each had a goal and an assist for the Jets, who’ve won three of their last four games. Leafs defenseman Rasmus Sandin departed in the third period following a knee-on-knee collision with the Jets’ Neil Pionk. There was no update on his condition following the game.

SPECTOR’S NOTE: With the Canucks cleaning house yesterday and the Montreal Canadiens conducting a front-office purge a week ago, could the Flyers be next? Their season has rapidly gone off the rails following a promising start, prompting calls from their fans for Alain Vigneault to be relieved of his coaching duties.

Speaking of teams mired in a winless skid, the New York Islanders dropped their 11th straight in a 3-2 shootout loss to the Chicago Blackhawks. Patrick Kane potted the game-winner while Marc-Andre Fleury picked up his 499th career victory. Mathew Barzal assisted on both Islanders’ goals while teammate Matt Martin was a late scratch.

SPECTOR’S NOTE: Injuries and a COVID outbreak decimated the Isles’ lineup over the past month. However, they also seemed to lack the spark that sent them to two straight conference finals and had them projected as a potential Stanley Cup contender this season.

Vegas Golden Knights goaltender Robin Lehner made 23 saves as his club held off the Calgary Flames 3-2. Nicolas Roy had a goal and an assist for the Golden Knights while teammates Max Pacioretty and Evgenii Dadonov netted the other two goals. Following the game, Lehner announced he had withdrawn from consideration for Sweden’s Olympic team citing health reasons after consulting with his psychiatrist and his agents.

Drew Doughty had a goal and two assists and Adrian Kempe scored twice as the Los Angeles Kings upset the Edmonton Oilers 5-1. Oilers captain Connor McDavid received a five-minute major and game misconduct for boarding Kempe in the third period. Oilers defenseman Darnell Nurse scored in his first game since being sidelined six games with an injured finger.

The Columbus Blue Jackets snapped a four-game losing streak by beating the San Jose Sharks 6-4. Adam Boqvist scored twice for the Jackets. Timo Meier and Matt Nieto each had two assists for the Sharks.

← Sunday NHL Rumor Roundup - December 5, 2021 NHL Rumor Mill - December 6, 2021 →
We use cookies on our website to give you the most relevant experience by remembering your preferences and repeat visits. By clicking “Accept”, you consent to the use of ALL the cookies.
Do not sell my personal information.
Cookie SettingsAccept
Manage consent