Are trades coming for the Canucks while they search for a new general manager? What’s the latest on the Canadiens hunt for a new GM? Find out in today’s NHL rumor mill.

NHL.COM: Kevin Woodley reported Vancouver Canucks president of hockey operations Jim Rutherford received calls from other clubs interested in making trades even before he arrived in Vancouver. The former general manager of the Pittsburgh Penguins, he was hired for the job last week and met with the Vancouver media for the first time yesterday. 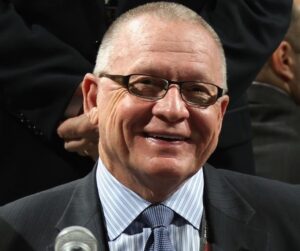 Rutherford acknowledged there are holes in the Canucks roster that must be addressed but he’s not going to rush into making any deals nor will he make a lot of calls. His primary focus is on improving the hockey department.

THE PROVINCE: Ben Kuzma reports Rutherford is busy compiling a list of potential candidates to replace Jim Benning as the Vancouver Canucks’ general manager. He hopes to hire someone in the near future and also indicated he’d like to hire a new assistant general manager later this week.

Rutherford said he’s not there to be the general manager but he’s capable of doing the job. He indicated he’d like to take some time to evaluate his roster. He also stated he doesn’t want to move draft picks unless they’re in the later rounds because it’s not the cycle the club is in.

SPECTOR’S NOTE: Rutherford has a well-earned reputation as a wheeler-dealer but he also understands the reality of the club he’s taking over in Vancouver. Kuzma points out they’re already capped out and their young core must be supported by players in the same age group.

It was only a couple of weeks ago that Canucks like J.T. Miller, Bo Horvat and Tanner Pearson were being floated as trade candidates. I daresay they’re off the market for now and perhaps for the remainder of the season.

Any significant moves by Rutherford and his new general manager will likely take place during the offseason. Much will depend on who becomes the next Canucks GM and the club’s performance over the rest of this season.

THE ATHLETIC: Arpon Basu and Marc Antoine Godin report there are at least three women on the Montreal Canadiens long list of potential general manager candidates. Even if a woman isn’t hired for the position, there’s a good chance they could be eligible for other roles in the organization.

SPECTOR’S NOTE: A woman has never held a general manager role in the NHL. She would have to be bilingual to become the Canadiens GM.

The Canadiens recently hired former New York Ranger GM Jeff Gorton as their executive vice president of hockey operations. He would work in tandem with whoever becomes their next GM. If they’re lacking NHL experience, he will mentor them until they’ve become accustomed to the role.

The leading candidates are believed to be Mathieu Darche and Daniel Briere. Darche is the director of hockey operations for the Tampa Bay Lightning while Briere manages the day-to-day operations of the ECHL’s Maine Mariners.

← NHL Morning Coffee Headlines - December 14, 2021 NHL Morning Coffee Headlines - December 15, 2021 →
We use cookies on our website to give you the most relevant experience by remembering your preferences and repeat visits. By clicking “Accept”, you consent to the use of ALL the cookies.
Do not sell my personal information.
Cookie SettingsAccept
Manage consent