NHL.COM: Los Angeles Kings defenseman Drew Doughty collected an assist in his 1,000th game while teammate Quinton Byfield tallied his first NHL goal in a 3-2 victory over the New York Islanders. Adrian Kempe tallied the winner as the Kings held off the Isles late in the third period. The Kings sit in third place in the Pacific Division with 50 points. 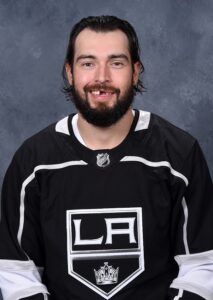 SPECTOR’S NOTE: Doughty, 32, has spent his entire 14-season NHL career with the Kings, winning two Stanley Cups and the Norris Trophy as the top defenseman in 2015-16. He has 22 points in 25 games this season. Byfield, meanwhile, was the second-overall pick in the 2020 NHL Draft. The 19-year-old center appeared in six games last season and four this season.

Florida Panthers captain Aleksander Barkov scored his 200th career goal and 500th career point to lead his club over the Vegas Golden Knights 4-1. Sam Bennett scored twice and Spencer Knight made 24 saves for the win as the Panthers regained first place in the overall standings with 65 points. The Golden Knights sit on top of the Pacific Division with 53 points.

Anaheim Ducks center Trevor Zegras scored twice, including a lacrosse-style goal as his club held off the Montreal Canadiens 5-4. Troy Terry had a goal and two assists as the Ducks moved to within one point of the Golden Knights in the Pacific.

J.T. Miller had a hat trick and collected an assist to lead the Vancouver Canucks to a 5-1 win over the Winnipeg Jets. Brock Boeser had a goal and two assists while goalie Spencer Martin made 33 saves for his first NHL win. With 43 points, the Canucks moved two points ahead of the slumping Jets and sit three points behind the Calgary Flames for the final wild-card spot in the Western Conference.

The Tampa Bay Lightning downed the New Jersey Devils 3-2 to remain two points behind the Panthers in the overall standings. Anthony Cirelli snapped a 2-2 tie and Andrei Vasilevskiy turned aside 31 shots for the Lightning. Jesper Bratt collected assists on both Devils’ goals.

A shootout goal by Andrei Svechnikov lifted the Carolina Hurricanes over the Ottawa Senators 3-2. Nino Niederreiter tied the game for the Hurricanes in the third period. They’re tied with the New York Rangers and Pittsburgh Penguins with 60 points but sit first in the Metropolitan Division. Senators center Josh Norris left the game in the first period with an upper-body injury.

SPECTOR’S NOTE: The Senators are already without leading scorer Drake Batherson for perhaps the remainder of the season with a high-ankle sprain. They also signed defenseman Nick Holden yesterday to a one-year, $1.3 million contract extension.

The Seattle Kraken picked up their first overtime win in franchise history by nipping the Pittsburgh Penguins 2-1. Jared McCann tied the game in the third period for the Kraken, setting the stage for Adam Larsson’s winning goal. Evgeni Malkin scored for the Penguins.

Columbus Blue Jackets captain Boone Jenner scored twice and picked up an assist to lead his club to a 5-3 upset of the New York Rangers. Sean Kuraly also scored twice for the Jackets while Joonas Korpisalo stopped 33 shots for the win. Artemi Panarin scored and picked up two assists for the Rangers while teammate Adam Fox is listed as day-to-day after leaving the game in the third period with an upper-body injury.

St. Louis Blues goaltender Ville Husso made 28 saves backstopping his club over the Calgary Flames 5-1. Husso is 6-0-0 in January while Brandon Saad scored two goals and picked up an assist. The Blues (57 points) sit one point behind the second-place Nashville Predators in the Central Division.

Connor McDavid scored in a shootout to give the Edmonton Oilers a 3-2 win over the Nashville Predators. McDavid also scored in regulation while Predators winger Filip Forsberg had a goal and an assist. With 44 points, the Oilers are two back of the Flames.

SPORTSNET: The Oilers signed Evander Kane to a one-year contract after the NHL said its investigation into whether the winger breached COVID-19 protocols produced insufficient evidence to conclude he knowingly violated those protocols. Terms were not revealed but Elliotte Friedman reported it was worth $750K in base salary with a $625K signing bonus plus a no-movement clause.

SPECTOR’S NOTE: Oilers general manager Ken Holland seems to believe adding a goal scorer carrying tons of personal baggage will help this struggling club overcome its shaky goaltending. It smacks of desperation by a GM who failed to suitably address his issues in the crease last summer and is now grasping at straws to save his season.

THE SCORE: Colorado Avalanche center Nathan MacKinnon was diagnosed with a broken nose following his collision with Boston Bruins winger Taylor Hall on Wednesday. A clearer timeline for his recovery remains to be determined.

TRIBLIVE.COM: cites a report by Daily Faceoff indicating Pittsburgh Penguins forward Drew O’Connor is dealing with a collapsed lung suffered during the club’s recent road trip. Neither the Penguins or O’Connor’s agent is confirming the report.

GOPHNX.COM: The Arizona Coyotes are reportedly in advanced discussions with Arizona State University to use the school’s new multi-purpose arena as their temporary home for the next three seasons while they await approval and construction of a new arena in Tempe. The facility seats just 5,000 people. The Coyotes lease at the Gila River Arena has been terminated at the end of this season by the city of Glendale.

SPECTOR’S NOTE: This is being done with the NHL’s blessing. The league is determined to maintain a franchise in the lucrative Arizona market.

NEW YORK POST: The Rangers will be retiring Henrik Lundqvist’s No. 30 in a ceremony before tonight’s game against the Minnesota Wild.

THE DALLAS MORNING NEWS: The Stars will retire Sergei Zubov’s No 56 before tonight’s game against the Washington Capitals.

SPECTOR’S NOTE: Congratulations to both players for their upcoming honours. Lundqvist was one of the greatest players in the Rangers’ long history while Zubov was a key player in the Stars rise to NHL dominance in the late-90s and early-2000s.

THE PROVINCE: Former Vancouver Canucks winger Jake Virtanen has been charged with sexual assault by Vancouver police stemming from a 2017 allegation. He’s currently playing in the KHL but is expected to make his first provincial court appearance on Feb. 10.