NHL.COM: Jacob Markstrom made 28 saves for his league-leading eighth shutout of the season as the Calgary Flames blanked the Vegas Golden Knights 6-0. Andrew Mangiapane scored twice, Matthew Tkachuk had a three-point night while Mikael Backlund had a goal and three assists. Golden Knights captain Mark Stone missed this game with an upper-body injury. With 54 points, the Flames sit four points ahead of the Dallas Stars for the final wild-card berth in the Western Conference and are three behind the St. Louis Blues. The Golden Knights (59 points) maintain a four-point lead over the Anaheim Ducks for first place in the Pacific Division. 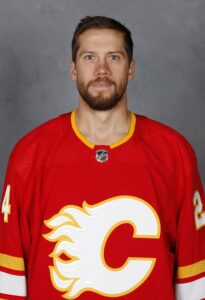 Speaking of the Stars, they nipped the Nashville Predators 4-3 on a third-period goal by Luke Glendening. Jason Robertson tallied two goals and Roope Hintz had a goal and an assist. Roman Josi collected two assists for the Predators (60 points), who hold a one-point lead over the Minnesota Wild for second place in the Central Division.

Chicago Blackhawks goaltender Marc-Andre Fleury kicked out 40 shots and Alex DeBrincat had a goal and two assists in a 4-1 victory over the Edmonton Oilers. Kirby Dach, Dylan Strome and Brandon Hagel each had a goal and an assist. The loss leaves the Oilers five points behind the Flames. The Oilers also lost defenseman Duncan Keith after he crashed into the end boards in the first period.

SPECTOR’S NOTE: Oilers goalie Mike Smith got his second start in as many games with Mikko Koskinen in COVID protocol. He still looked rusty after being sidelined for over a month.

The Vancouver Canucks’ playoff hopes took a hit after falling 6-3 to the New York Islanders. Zach Parise scored in his 1,100th career game as the Isles tallied five times in the first period, including three goals 31 seconds apart, driving Jaroslav Halak from the net. The Canucks sit six points back of the Flames.

Dylan Larkin, Lucas Raymond, Robby Fabbri and Pius Suter each had a goal and an assist to give the Detroit Red Wings a 6-3 win over the Philadelphia Flyers. Wings defenseman Moritz Seider collected two assists.

Arizona Coyotes goalie Karel Vejmelka made 34 saves to beat the Seattle Kraken 5-2. Nick Schmaltz scored two goals while Phil Kessel and Alex Galchenyuk each had a goal and an assist.

SPECTOR’S NOTE: Some observers question why the Canadiens would replace Ducharme now rather than at the end of this season, concerned that it will hurt the club’s chances of winning the draft lottery. However, making no changes risked worsening an already toxic atmosphere within the dressing room. It wasn’t that the Habs were losing so many games so much as they were such lopsided, dispiriting losses lacking any sustained level of competition on the players’ part. Leaving the situation unaddressed risked worsening the situation and making the anticipated rebuild that much tougher to accomplish.

Ducharme’s supporters point out he came into the role under difficult circumstances, not the least of which is the Canadiens’ reportedly on pace to exceed 600 man-games lost to injury and illness this season. Nevertheless, a number of veterans seemed to have tuned him out while the younger players were growing discouraged.

The hiring of St. Louis was a surprise. On the one hand, he has no coaching experience other than at the peewee level. He’ll have to rely heavily on the coaching staff and there’s no certainty he’ll be able to move the needle in a positive direction. On the other, he’s a Hall-of-Famer who was well-respected in part for his leadership one and off the ice during his playing days. He’s also in the role for only a couple of months and can be replaced in the offseason if he doesn’t pan out.

If this hiring succeeds, hockey ops VP Jeff Gorton and general manager Kent Hughes will look like geniuses for thinking outside the box. If it fails, it will shake whatever confidence Montreal pundits and fans have in the new management team, casting a shadow of doubt over their plans for this franchise.

Speaking of the Canadiens, former Tampa Bay Lightning star Vincent Lecavalier denied a report claiming he was about to be hired as assistant GM.

BOSTON HOCKEY NOW: Bruins goaltender Tuukka Rask officially retired yesterday, citing his body’s slow recovery from offseason hip surgery. He spent his entire 15-season NHL career with the Bruins, finishing as their all-time leader in games played for goalies with 564 and wins with 308, as well as second all-time with a 2.28 goals-against average, .921 save percentage and 52 shutouts. He won the Vezina Trophy in 2014, the Jennings Trophy in 2020 and backstopped the Bruins to the Stanley Cup Final in 2013 and 2019.

SPECTOR’S NOTE: Best wishes to Rask and his family in their future endeavors. He was unappreciated at times by some Bruins fans but will forever rank among their greatest goaltenders.

Speaking of the Bruins, winger Brad Marchand received a six-game suspension for roughing and high-sticking Pittsburgh Penguins goaltender Tristan Jarry during Tuesday’s game. They also learned captain Patrice Bergeron has been ruled out of tonight’s game against the Carolina Hurricanes after suffering an upper-body injury (head) in that game against the Penguins.

SPECTOR’S NOTE: Marchand’s supporters say the Bruins winger was in reaction to Jarry apparently slashing or spearing teammate Charlie Coyle. Regardless, his actions were over-the-top and has taken the oft-suspended scorer out of the lineup for a significant period of time.

SPECTOR’S NOTE: No surprise there. Berube coached the Blues to their first-ever Stanley Cup (2019) and has made them a perennial playoff club during his tenure.

THE PROVINCE: Former US Women’s hockey star Cammi Granato will join the Vancouver Canucks as an assistant general manager. She joins Emilie Castonguay, who was also hired as an assistant GM by the Canucks earlier this year.