NHL.COM: The Colorado Avalanche’s points streak reached 19 games (17-0-2) after blanking the Dallas Stars 4-0. Darcy Kuemper turned in a 23-save shutout, Gabriel Landeskog scored twice and Nathan MacKinnon picked up an assist in his return to action after being sidelined since late January by a concussion and broken nose. With 72 points, the Avalanche opened a three-point lead over the Florida Panthers for first place in the overall standings. The Stars (52 points) remain three points out of the final wild-card spot in the Western Conference. 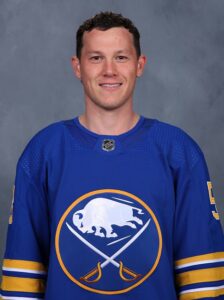 Buffalo Sabres winger Jeff Skinner scored four goals and collected an assist to beat the Montreal Canadiens 5-3. Teammate Alex Tuch picked up three assists. The Habs have lost 10 in a row. Canadiens defenseman Ben Chiarot missed this game and was placed on injured reserve with a lower-body injury and is expected to miss one week.

SPECTOR’S NOTE: A one-week absence isn’t likely to dampen interest in Chiarot in the trade market or hurt his value. It could perhaps hasten the Canadiens’ efforts to find a suitable trade partner for the pending free-agent defenseman.

Pittsburgh Penguins captain Sidney Crosby had two assists as his club doubled up the New Jersey Devils 4-2. It was Crosby’s 409th career multi-point game, moving him into 11th on the all-time list. Bryan Rust, Brian Boyle and Mike Matheson each had a goal and an assist. With the win, the Penguins move into first place in the Metropolitan Division with 68 points.

Ottawa Senators goaltender Anton Forsberg kicked out 33 shots to upset the Washington Capitals 4-1. Brady Tkachuk and Connor Brown each had a goal and an assist for the Senators. The Capitals have lost five straight home games and hold the first Eastern Conference wild-card spot with 61 points.

SPECTOR’S NOTE: The Capitals have struggled of late with goaltending being one of the issues behind their slump. That’s sparked speculation over whether they’ll pursue an upgrade like Chicago’s Marc-Andre Fleury before the March 21 trade deadline.

Senators forward Austin Watson missed this game and will miss his club’s next contest after receiving a two-game suspension for a hit to the head of Boston Bruins defenseman Jack Achan on Saturday.

← Sunday NHL Rumor Roundup - February 13, 2022 NHL Rumor Mill - February 14, 2022 →
We use cookies on our website to give you the most relevant experience by remembering your preferences and repeat visits. By clicking “Accept”, you consent to the use of ALL the cookies.
Do not sell my personal information.
Cookie SettingsAccept
Manage consent