ESPN.COM: New Jersey Devils center Jack Hughes was placed on the NHL’s COVID protocol list after participating in the 2022 All-Star Game over the weekend. 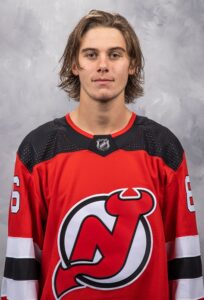 SPECTOR’S NOTE: It’ll be interesting to see how many other All-Star participants join Hughes on the protocol list.

SPORTSNET (via THE SCORE): Carolina Hurricanes head coach Rod Brind’Amour praised the Florida Panthers when asked about them during an interview on Friday. “That’s the juggernaut for me,” he said, commending the club’s management for the “great job” it did to construct the roster. “There’s no weaknesses,” said Brind’Amour.

SPECTOR’S NOTE: The Panthers could get even better if they land a top-four, left-side defenseman before the March 21 trade deadline. Their only real weakness is the lack of playoff success. Perhaps that will change this year.

TWINCITIES.COM: Dane Mizutani points out the Minnesota Wild’s current record of 28 wins, 10 losses and three overtime losses is a franchise-best after 41 games. He cites several factors, including the one-two scoring punch of Kirill Kaprizov and Mats Zuccarello, that makes them legitimate Stanley Cup contenders this season.

SPECTOR’S NOTE: The Wild’s lack of experienced depth at center could hold them back, but there’s no question they’ve become a rising force since last season in the Western Conference.

PITTSBURGH TRIBUNE-REVIEW (via THE SCORE): Penguins president of hockey operations Brian Burke praised general manager Ron Hextall’s support of Tristan Jarry after the latter’s struggles during last year’s playoffs. Jarry is enjoying a bounce-back performance this season. He’s among this season’s top netminders and played in the 2022 All-Star Game.

SPECTOR’S NOTE: Hextall ignored calls to find a replacement for Jarry via trade or free agency last summer. Some observers still believe the Penguins should go shopping for a goalie but those calls are now for a reliable backup for Jarry.

SPECTOR’S NOTE: I can’t find the words to describe my reaction to this story given everything about the Blackhawks organization that’s preceded this report. Disgust doesn’t seem sufficient to cover it.

OTTAWA SUN: The Senators are among the Canadian clubs that approached the NHL about playing some home games within the stringent rules in Ontario regarding large gatherings that are in place until March.

Arizona board of regents officially reviewing Coyotes plan on Thursday. States the new arena accommodations would be built, paid for by Coyotes, in time for Dec 2022 games pic.twitter.com/znYUhyHPjL

← Sunday NHL Rumor Roundup - February 6, 2022 NHL Rumor Mill - February 7, 2022 →
We use cookies on our website to give you the most relevant experience by remembering your preferences and repeat visits. By clicking “Accept”, you consent to the use of ALL the cookies.
Do not sell my personal information.
Cookie SettingsAccept
Manage consent