The Leafs down the Hurricanes, the Senators defeat the Devils, the three stars of the week, and more in today’s NHL morning coffee headlines.

NHL.COM: Mitch Marner and Auston Matthews each scored twice as the Toronto Maple Leafs defeated the Carolina Hurricanes 4-3. Marner tallied the winner in overtime to extend his goals streak to eight games while Matthews moved into third place (31 goals) in the NHL goal-scoring race. The Leafs (63 points) have won six straight and sit three points behind the second-place Tampa Bay Lightning in the Atlantic Division. 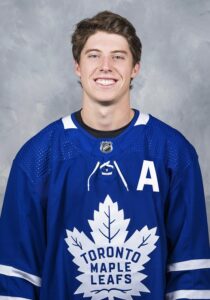 Ottawa Senators forwards Connor Brown and Nick Paul each had a goal and an assist while goaltender Matt Murray made 32 saves in a 4-1 victory over the New Jersey Devils, handing the latter their seventh straight loss. Brown has missed nine games with a broken jaw.

SPORTSNET: Jack Eichel skated in practice with the Vegas Golden Knights without a non-contact jersey yesterday for the first time since they acquired him last November from the Buffalo Sabres.

SPECTOR’S NOTE: Eichel’s debut with the Golden Knights reportedly remains several weeks away. He could suit up by late February at the earliest but there’s talk his first game could take place in March.

BOSTON HOCKEY NOW: The Bruins have shut down goaltender Tuukka Rask for the remainder of this week with a lower-body injury.

EDMONTON JOURNAL: Netminder Mike Smith has come off injured reserve but his age and injury history suggest the Oilers cannot rely on him to carry the starter’s duties for the remainder of this season. He’s only appeared in six games this season.

SPECTOR’S NOTE: The Oilers could turn to inexperienced Stuart Skinner if Smith gets hurt again and/or if Mikko Koskinen continues to struggle. General manager Ken Holland could also try to add a goalie before the March 21 trade deadline.

CBS SPORTS: The Ottawa Senators will be without center Josh Norris for two more weeks as he recovers from a shoulder injury.

FLORIDA HOCKEY NOW: The Panthers signed top prospect goalie Mack Guzda to a three-year entry-level contract. Guzda, 21, is an undrafted netminder with the Barrie Colts who was the OHL’s top goalie in December and January. He’ll continue to play for the Colts but could join the Panthers or their AHL affiliate in Charlotte at the end of the OHL season.

SPECTOR’S NOTE: The Guzda signing prompted some observers to wonder if this move means the Panthers could shop young goalie Spencer Knight, perhaps to the Arizona Coyotes as part of a package for Jakob Chychrun before the March 21 trade deadline. However, I think that conjecture is premature. Trading away Knight this season would leave the Panthers without a reliable backup for Sergei Bobrovsky. They won’t toss an inexperienced kid into that role.