​Check out the latest on Ben Chiarot, Brandon Hagel and Artem Zub plus a look at the Islanders’ trade options in the Sunday NHL Rumor Roundup.

LATEST ON CHIAROT, HAGEL AND ZUB

SPORTSNET: Elliotte Friedman reports hearing there’s “a lot going on” regarding Ben Chiarot. He believes the St. Louis Blues are among the clubs interested in the 31-year-old Montreal Canadiens defenseman.

SPECTOR’S NOTE: Chiarot is sidelined until later this week with a minor injury. It’s believed the Canadiens want to move him as soon as possible rather than risk him suffering a more serious injury in the weeks leading up to the trade deadline.

The Blues are among several teams he’s been linked to in the rumor mill, including the Boston Bruins, Florida Panthers and New York Rangers. Most insiders believe he could fetch a first-round pick for the Canadiens. Perhaps we’ll learn later this week where he’ll be going and what the Habs will actually get for him.

THE ATHLETIC: Mark Lazerus acknowledged recent trade rumors claiming the Chicago Blackhawks are getting calls about Brandon Hagel. However, he cites a team source saying the 23-year-old winger isn’t going anywhere. Blackhawks management understands what they have in Hagel, who’s constantly improving and carries an affordable $1.5 million annual cap hit over the next two seasons. 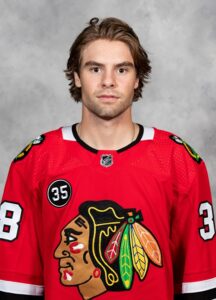 SPECTOR’S NOTE: As I’ve said before about Hagel, I don’t doubt the Blackhawks are getting calls about him but that doesn’t mean they’re going to move him. It would take a significant offer to pry him out of Chicago. Hagel should play a key role in their long-term plans.

OTTAWA SUN: Bruce Garrioch shoots down a rumor claiming the Senators will move Artem Zub before the March 21 trade deadline. “There hasn’t even been any discussion. I’m not sure where that social media rumor circulated from Saturday, but it’s not happening,” said Garrioch.

SPECTOR’S NOTE: Zub is a bargain for the Senators, signed through 2022-23 with a $2.5 million annual cap hit. He has 14 points in 48 games with a plus-minus of plus-five with the Senators, logging first-pairing minutes (21:37) and sitting fifth among their skaters in shorthanded ice time per game (2:12) while leading them with 88 blocked shots.

THE ATHLETIC: Kevin Kurz recently examined which players could become trade candidates should the New York Islanders become sellers by the March 21 deadline. Goaltender Semyon Varlamov could potentially net them a decent asset or two. However, he’s signed through 2022-23 and moving him out could have an adverse effect upon starter Ilya Sorokin.

Attention will be paid to pending unrestricted free agents such as Cal Clutterbuck, Zach Parise, Andy Greene and Zdeno Chara. Of the four, the 34-year-old Clutterbuck could draw the most interest in the trade market. Despite Chara’s age (45), he could appeal to more teams than the 39-year-old Greene as a bottom-pairing defenseman.

The Islanders could also listen to offers for Kyle Palmieri and Josh Bailey. However, they’re both signed beyond this season and carry $5 million cap hits. One source doubts there’s much of a market for Palmieri, who was on the decline when the Isles acquired him.

SPECTOR’S NOTE: Islanders GM Lou Lamoriello saddled himself with Palmieri’s contract, which could prove very difficult to move. The 32-year-old Bailey’s production has been steadily declining since his career-high 71-point campaign in 2017-18. Yes, the reduced number of games brought about by COVID -19 over the past two years contributed to that but that decline will still affect his trade value.

Clutterbuck should draw some interest from clubs seeking a gritty checking-line energy forward. Chara, Parise and Greene have had fine NHL careers but they’re now well past their primes and probably won’t be that enticing to playoff contenders.

← NHL Morning Coffee Headlines - February 20, 2022 NHL Morning Coffee Headlines - February 21, 2022 →
We use cookies on our website to give you the most relevant experience by remembering your preferences and repeat visits. By clicking “Accept”, you consent to the use of ALL the cookies.
Do not sell my personal information.
Cookie SettingsAccept
Manage consent