​Check out the latest on the Canadiens, Flyers, Capitals, Leafs and Blue Jackets in today’s NHL rumor mill. 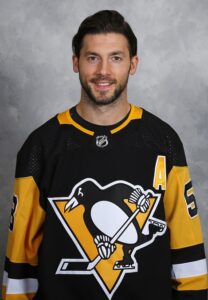 D’Amico’s colleague Jimmy Murphy pointed out rumors have linked Letang to the Canadiens for some time. The 34-year-old Penguins defenseman’s former agent is Kent Hughes, who’s now the Habs general manager. Letang, meanwhile, laughed off the speculation though it’s possible the blueliner could be playing his final season with the Penguins.

Meanwhile, D’Amico observed reports of the Edmonton Oilers scouting Tuesday’s Canadiens – Winnipeg Jets game. He wondered if they may have been checking out Canadiens defenseman (and pending UFA) Ben Chiarot.

MONTREAL GAZETTE: Stu Cowan reports Jeff Petry could be changing his mind about wanting a trade out of Montreal since Martin St. Louis took over as head coach from Dominique Ducharme. The 34-year-old defenseman struggled under Ducharme this season and openly criticized him. He’s since regained his form under St. Louis. He also acknowledged the Habs’ new bench boss is the type of coach that might make him want to stay in Montreal.

SPECTOR’S NOTE: I don’t doubt Canadiens management will aggressively pursue free agents but Habs fans shouldn’t get their hopes up too high. Cap Friendly indicates they’ve got over $79 million invested in just nine active roster players for 2022-23. They’ll be allowed to go over next season’s $82.5 million with the all-but-retired Shea Weber ($7.857 million) going on long-term injury reserve again, and they could get $10.5 million more if the same thing happens to goaltender Carey Price.

However, the Canadiens have long had difficulty attracting top free agents to Montreal. Part of that’s because of the high provincial taxes and Quebec being a francophone province. Part of it is because Montreal is among the NHL’s most demanding markets. Another is they haven’t been very good for a long time.

Letang and Bergeron could be loyal to Hughes, but I doubt that will sway them to sign with the Canadiens. Letang prefers to stay in Pittsburgh but if that’s not possible I see him trying to join a Cup contender. Bergeron will finish his career with the Bruins.

As for Petry, he might be willing to stay in Montreal now but management could have other plans if they need to free up cap space. If there’s a market for Petry, they could explore it.

NBC SPORTS PHILADELPHIA: With the trade deadline approaching, could Flyers defenseman Keith Yandle agree to waive his no-movement clause. Moving on to another club could put his Ironman streak in jeopardy, whereas he’d have a good chance of running it to 1,000 games if he remains a Flyer.

SPECTOR’S NOTE: The Avalanche, Blue and Wild are said to be Giroux’s preferences though recent reports indicate he hasn’t yet approached Flyers management about waiving his no-movement clause. Of the three, the Wild could stand the best chance of landing him given their salary-cap space.

The Panthers are believed more interested in adding a top-four left-shot defenseman. The Lightning has no cap space so it’ll require considerable wizardry on the part of GM Julien BriseBois to bring Giroux to Tampa Bay.

No offense to Yandle, whose Ironman streak is a significant achievement, but I don’t think there’s much of a market for him now. I can see him finishing this season in Philadelphia.

THE SCORE: Capitals GM Brian MacLellan said his club might not be as aggressive in the market leading up to the trade deadline compared to previous years. He acknowledged his roster needs help to return to where they were at the start of 2022 when they were among the top teams.

MacLellan cited his inexperienced goaltending duo of Ilya Samsonov and Vitek Vanecek as needing improvement. He admitted calling around the league earlier in this season but couldn’t find anyone that would get them over the hump.

WASHINGTON HOCKEY NOW: Sammi Silber also reported on MacLellan’s comments about the Capitals goaltending. In addition, she noted MacLellan acknowledging a need for an upgrade among the club’s middle-six forwards.

SPECTOR’S NOTE: The Capitals have over $3.8 million in projected trade deadline cap space. Finding suitable trade options that fit within that space to address those needs could be difficult.

MacLellan could be seeking more of a hockey trade similar to the deal he swung at last year’s deadline with Detroit that brought him forward Anthony Mantha, who’s been sidelined since November but is expected to return to the lineup soon.

Chicago’s Marc-Andre Fleury is the best rental option but he doesn’t seem keen to waive his no-trade clause. After that, the depth drops sharply in the quality of available goaltenders.

NBC SPORTS: James O’Brien reports there are few decent options to address the concerns over the Toronto Maple Leafs shaky goaltending. While Marc-Andre Fleury is the best of the bunch that could be available, he also has a history of giving up bad goals, something that could be magnified playing in the intense Toronto market.

SPECTOR’S NOTE: In other words, the Leafs could end up sticking with the current tandem of Jack Campbell and Petr Mrazek for the remainder of the season. They could end up trying to shore up their defense.

THE ATHLETIC: Pierre LeBrun reports Columbus Blue Jackets GM Jarmo Kekalainen has no patience for the trade rumors swirling around winger Patrik Laine. “Yeah, it bothers me because people make shit up, that’s what bothers me,” he said.

Laine’s status as a restricted free agent with arbitration rights coming off a one-year, $7.5 million contract has sparked media speculation about his future in Columbus. Kekalainen said when the time is right he’ll sit down with Laine’s representatives to examine their options in order to keep him with the Blue Jackets.

SPECTOR’S NOTE: Gotta love it when general managers let their guard down a little and get salty. Laine has said he enjoys living and playing in Columbus. Nevertheless, it could prove very expensive for the Jackets to sign him. It could make for an interesting summer.

← NHL Morning Coffee Headlines - March 3, 2022 NHL Morning Coffee Headlines - March 4, 2022 →
We use cookies on our website to give you the most relevant experience by remembering your preferences and repeat visits. By clicking “Accept”, you consent to the use of ALL the cookies.
Do not sell my personal information.
Cookie SettingsAccept
Manage consent