The Devils could shop P.K. Subban at the trade deadline, updates on Shea Weber, Tomas Hertl and Jake DeBrusk plus the latest on the Islanders, Capitals and Jets in today’s NHL rumor mill.

THE ATHLETIC: Pierre LeBrun reports New Jersey Devils general manager Tom Fitzgerald said he’s informed P.K. Subban the club doesn’t intend to sign him to a contract extension. The 32-year-old defenseman is slated to become an unrestricted free agent this summer. Fitzgerald also told Subban he could move him before the March 21 trade deadline if he receives an offer that makes sense for the Devils. 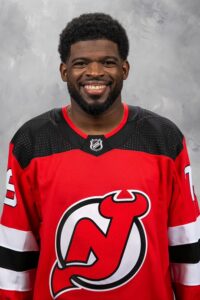 Fitzgerald also stressed the value of Damon Severson to the Devils. He said he hasn’t spoken to anyone about the 27-year-old defenseman, who has a year remaining on his contract. However, he stressed it would take “a really good package” that helps the Devils now and in the future to pry away Severson. He also didn’t rule out making a splash in this summer’s free-agent market.

THE HOCKEY NEWS: Adam Proteau suggests Fitzgerald could retain some of the remainder of Subban’s $9 million salary-cap hit to facilitate a trade but that would require a team offering up top assets such as prospects or draft picks.

Subban isn’t the all-star defenseman he once was. Proteau suggested the Dallas Stars or Los Angeles Kings as offseason destinations for the veteran rearguard, though the decline in his performance in recent years will affect his value.

SPECTOR’S NOTE: Subban has barely come up at all in trade chatter this season. That could change as we get closer to the trade deadline and if injuries strike the blueline of a playoff contender.

Subban’s actual salary for this season is $8 million, of which $6 million was paid by the Devils at the start of the season as a signing bonus. Nevertheless, the Devils will have to retain a big chunk of his remaining cap hit to improve his trade value.

LATEST ON WEBER, HERTL AND DEBRUSK

THE ATHLETIC: Marc Antoine Godin believes the Arizona Coyotes would be a good trade partner for the Montreal Canadiens to shed the contract of Shea Weber. The 36-year-old defenseman’s career could be finished due to injuries, leaving him on long-term injury reserve.

The Coyotes have only 10 players under contract next season at a total cap hit of $37.17 million. They’ll need to add over $23 million to their payroll but could prefer remaining a budget team next season. Godin believes the Canadiens would have to add a valuable asset to convince the Coyotes to go for it.

SPECTOR’S NOTE: The Canadiens have 12 picks in this year’s draft, with two in the first round, three in the second, two in the fourth and two in the seventh round. They’ll likely add more should they ship out some players as expected by the trade deadline. The Habs could package a couple of decent picks with Weber to tempt the Coyotes.

SAN JOSE HOCKEY NOW: Sheng Peng cites reports indicating the Sharks are trying hard to sign Tomas Hertl to a contract extension. The 28-year-old pending UFA center hasn’t been placed on the trade block yet, but that could change if there’s no progress toward a deal as deadline day draws near.

THE ATHLETIC: Lisa Dillman recently examined the pros and cons of the Los Angeles Kings potentially trading for Boston Bruins winger Jake DeBrusk. While she believes DeBrusk to the Kings would make sense on some levels, they’re not facing any genuine urgency to make a splash at this year’s trade deadline.

SPECTOR’S NOTE: The Kings are currently in the thick of the Western Conference playoff race. They could make an addition by the deadline but GM Rob Blake could stick with his current roster for the rest of the season. He might prefer retaining assets for this summer’s trade market when better long-term options could be available.

UPDATES ON THE ISLANDERS, CAPITALS AND JETS

NEW YORK POST: Larry Brooks recently reported pending New York Islanders UFAs such as Cal Clutterbuck, Zach Parise, Andy Greene and Zdeno Chara could be gone by the trade deadline. However, the Isles still have seven players 30-or-older under contract beyond this season.

Semyon Varlamov is signed through next season, Josh Bailey and Matt Martin each have two seasons left while Brock Nelson and Kyle Palmieri have three years left, Anders Lee has four years to go and Casey Cizikas has five years.

SPECTOR’S NOTE: If Isles GM Lou Lamoriello does make some cost-cutting moves by the trade deadline they’ll likely involve those aging UFAs. Some of the others could be peddled in the offseason if he feels the club needs to add more youth into the lineup.

THE ATHLETIC: Tarik El-Bashir reports Washington Capitals GM Brian MacLellan remains interested in adding a rental goaltender provided he’s a significant upgrade over the current tandem of Vitek Vanecek and Ilya Samsonov. The top option is the Chicago Blackhawks’ Marc-Andre Fleury but other clubs are also interested in him plus he has a 10-team no-trade list.

MacLellan could also pursue an affordable upgrade for his middle-six forwards such as Seattle’s Calle Jarnkrok or Marcus Johansson. He hasn’t ruled out making an aggressive pitch for someone like Philadelphia’s Claude Giroux or San Jose’s Tomas Hertl, but that won’t be easy given their limited cap space. MacLellan has no intention of parting with a top prospect like Connor McMichael or Hendrix Lapierre and prefers to retain his high draft picks.

SPECTOR’S NOTE: MacLellan won’t have much luck landing Fleury, Giroux or Hertl if he won’t part with a top prospect or a first as part of the return.

WINNIPEG FREE PRESS: Jeff Hamilton reports the Jets could become sellers if they keep losing ground in the Western Conference playoff race. Most of the Jets trade rumors of late are about pending UFAs such as Andrew Copp and Paul Stastny.

SPECTOR’S NOTE: NHL Watcher cited Sportsnet’s Elliotte Friedman discussing Copp during his 32 Thoughts podcast on Monday. He believes the Jets forward will be coveted if he hits the trade block, suggesting the Colorado Avalanche as a possible destination.

← NHL Morning Coffee Headlines - March 8, 2022 NHL Morning Coffee Headlines - March 9, 2022 →
We use cookies on our website to give you the most relevant experience by remembering your preferences and repeat visits. By clicking “Accept”, you consent to the use of ALL the cookies.
Do not sell my personal information.
Cookie SettingsAccept
Manage consent