NHL.COM: Jake Guentzel scored twice and set up two others and Sidney Crosby had a three-point game as they led the Pittsburgh Penguins to a 6-3 victory over the New York Islanders. With the win, the Penguins sit in third place in the Metropolitan Division with 97 points, securing a playoff spot for the 16th consecutive season. Zdeno Chara scored his first goal of the season for the Islanders while teammate Brock Nelson collected two assists. 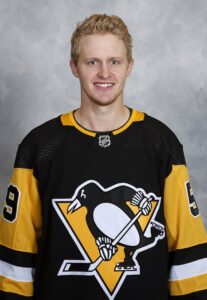 The Tampa Bay Lightning clinched a postseason berth by nipping the Anaheim Ducks 4-3. Anthony Cirelli scored in overtime after Nikita Kucherov tied the game for Tampa Bay in the final seconds of regulation. Cirelli, Steven Stamkos and Alex Killorn finished the night with two points for the Lightning as they sit in third place in the Atlantic Division with 98 points. Adam Henrique scored twice for the Ducks.

SPECTOR’S NOTE: Lightning goaltender Andrei Vasilevskiy was pulled in the second period after giving up three goals on 13 shots, marking the first time he’s gotten the hook since March 2018. He’s 0-3-1 in his last five starts.

John Tavares collected three assists while William Nylander, Michael Bunting and Ilya Mikheyev each scored two goals as the Toronto Maple Leafs thumped the Washington Capitals 7-3. Auston Matthews picked up two assists to reach 101 points, becoming the third player in Leafs history to reach the 100-point plateau. The Leafs sit in second place in the Atlantic Division with 102 points. John Carlson had a goal and an assist for the Capitals, who hold the final Eastern Conference wild-card berth with 92 points.

SPECTOR’S NOTE: Matthews sits fourth among this season’s points leaders and remains in first place in the goal-scoring race with 58. He joins Darryl Sittler and Doug Gilmour as the only Leafs with 100-point seasons.

St. Louis Blues forwards Vladimir Tarasenko and Robert Thomas each collected five points in a 6-2 victory over the Buffalo Sabres. Tarasenko tallied a hat trick and two assists while Thomas had five helpers. Pavel Buchnevich had a goal and two assists while Jordan Binnington got the win with a 35-save effort. With seven straight wins, the Blues sit in third place in the Central Division with 98 points.

Leon Draisaitl scored a hat trick and Mike Smith kicked out 30 shots as the Edmonton Oilers shut out the Nashville Predators 4-0. Connor McDavid and Ryan Nugent-Hopkins each had two assists for the Oilers as they sit in second place in the Pacific Division with 92 points. The Predators, meanwhile, cling to the first Western Conference wild-card berth with 89 points.

An overtime goal by Frederick Gaudreau lifted the Minnesota Wild to a 3-2 win over the Dallas Stars. Kevin Fiala scored twice for the Wild while Jason Robertson netted both goals for the Stars. The Wild are tied with the Blues with 98 points but hold second place in the Central Division with a game in hand. The Stars, meanwhile, are tied with Nashville but hold the final Western wild-card spot because the Predators have more regulation wins.

The Vegas Golden Knights remain two points back of the Stars after snuffing out the Calgary Flames 6-1. Jonathan Marchessault and William Karlsson each had a goal and two assists while Logan Thompson made 35 saves for the win. The loss prevented the Flames from clinching a playoff spot. They remain in first place in the Pacific with 99 points, sitting seven up on the second-place Oilers.

Vancouver Canucks center J.T. Miller picked up five assists in a 7-1 drubbing of the Arizona Coyotes. Quinn Hughes picked up three assists while Vasily Podkolzin and Alex Chiasson each tallied two goals. The Canucks remain in the Western playoff chase with 84 points, five behind the Predators and Stars.

SPECTOR’S NOTE: Canucks captain Bo Horvat left the game in the second period after taking an Anton Stralman slapshot off his right ankle. He was seen following the game wearing a walking boot. No word yet on his status but his potential absence from the Canucks’ remaining games could be a big blow for their postseason hopes. Head coach Bruce Boudreau remains optimistic over his captain’s condition.

The Ottawa Senators netted three unanswered second-period goals to defeat the Boston Bruins 3-2. Tim Stutzle led the way for the Senators with a goal and two assists while Anton Forsberg made 40 saves. Bruins goaltender Linus Ullmark left the game with an injury following the first period after taking a shot to the mask. No further word on his condition following the game. With 95 points, the Bruins remain three points ahead of the Capitals for the first Eastern Conference wild-card berth.

Detroit Red Wings goaltender Alex Nedeljkovic turned in a 46-save shutout to upset the Carolina Hurricanes 3-0. Moritz Seider, Adam Erne and Filip Zadina were the goal scorers. The loss leaves the Metropolitan Division-leading Hurricanes just two points up on the second-place New York Rangers with 104 points.

The league-leading Colorado Avalanche picked up their eighth straight win by beating the New Jersey Devils 3-1. Pavel Francouz made 26 saves and Artturi Lehkonen had a goal and an assist for the Avalanche, who hold a four-point lead over the Florida Panthers in the overall standings with 114 points.

Patrick Kane had a goal and two assists and Alex DeBrincat collected three helpers as the Chicago Blackhawks snapped an eight-game losing skid with a 5-4 victory over the San Jose Sharks to officially eliminate the latter from playoff contention. DeBrincat tallied the winning goal in the shootout as the Blackhawks handed the Sharks their eighth straight loss.

SPORTSNET: The NHL Players’ Association executive board voted yesterday to release the findings of an independent investigation into the association’s handling of former Chicago Blackhawks winger Kyle Beach’s sexual assault allegations against the club’s video coach Brad Aldrich in 2010. PA executive director Donald Fehr was contacted twice about Beach’s allegations against Aldrich. Fehr said he couldn’t recall the conversations but didn’t deny that they had taken place.

SPECTOR’S NOTE: Some “old school” critics can’t handle the fact that the game, like everything in life, is evolving and changing. Zegras’ goals aren’t against the rules and require a certain amount of skill to pull off. His critics accuse him of disrespecting the game or “hotdogging” but what he’s really doing is using creativity to score goals, which is what the game is about. Those supposed gatekeepers of hockey should be appreciative of Zegras’ skill and the positive attention it’s bringing to the NHL in its efforts to grow the game while entertaining the current fans.

ESPN.COM: Minnesota Wild center Ryan Hartman is flattered by the outpouring of donations to help him pay his $4,500.00 fine for recently flipping off Edmonton Oilers winger Evander Kane in a recent game. He indicated he can afford to pay off the fine and will donate the money sent by the fans to a pediatric hospital located two blocks from the Wild’s home arena.

STARTRIBUNE.COM: Former Minnesota North Stars forward Tom McCarthy passed away yesterday at age 61. McCarthy spent nine seasons in the NHL from 1979-80 to 1987-88, spending seven seasons with the North Stars and two with the Boston Bruins. He tallied 179 goals and 399 points in 460 games before injuries cut short his career, including a career-best 39 goals and 70 points in 66 games in 1983-84.