NHL.COM: The Minnesota Wild clinched a playoff berth with a 5-4 overtime victory over the San Jose Sharks. Jared Spurgeon scored twice, including the game-winner, Kevin Fiala had a goal and three assists and Frederick Gaudreau collected three assists for the Wild, who sit in third place in the Central Division with 101 points. The Sharks have lost 10 straight games. 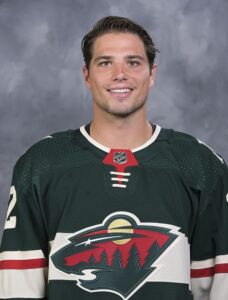 William Nylander scored the game-winning goal as the Toronto Maple Leafs doubled up the New York Islanders 4-2. The Leafs set single-season franchise records with 50 wins and 106 points as they sit in second place in the Atlantic Division. They also officially eliminated the Islanders from playoff contention, meaning the Washington Capitals have secured a postseason berth with 94 points as they sit in the final Eastern Conference wild-card berth.

SPECTOR’S NOTE: The Leafs sat out Auston Matthews from this game as he’s nursing a minor injury. He’s listed as day-to-day but head coach Sheldon Keefe wasn’t concerned his condition might worsen.

The eight Eastern Conference playoff clubs have now been determined. What follows over the remaining games of the regular season will be jockeying for position to determine home-ice advantage in the opening round of the 2022 postseason.

The St. Louis Blues erupted for seven second-period goals to set a club record for most goals in a single period as they crushed the Nashville Predators 8-3. Brayden Schenn, Jordan Kyrou and Calle Rosen each scored twice while Vladimir Tarasenko had a goal and two assists for the Blues, who sit one point ahead of the Wild in second place in the Central Division. It was also the most goals the Predators have ever given up in a single period as they drop behind the Dallas Stars into the final Western Conference wild-card spot.

SPECTOR’S NOTE: The Predators (91 points) are tied with the Stars but the latter holds a game in hand. Earlier in the day, the Predators announced defenseman Jeremy Lauzon would not play as he’s week-to-week with a lower-body injury.

Blues coach Craig Berube provided an update on Nick Leddy’s condition after he had been cut under one eye during Saturday’s win over the Wild. He said the defenseman was feeling better and doesn’t think he’ll be sidelined for very long.

SPECTOR’S NOTE: Fun fact: the Panthers have lost only once in the 13 games they’ve played since acquiring Claude Giroux from the Philadelphia Flyers.

The Anaheim Ducks snapped a 13-game winless skid by downing the Columbus Blue Jackets 6-4. John Gibson made 31 saves for his first victory since March 1 while Troy Terry scored twice and collected an assist. Jackets winger Patrik Laine missed the game with an upper-body injury and Zach Werenski left the game early in the first period with a facial injury.

Buffalo Sabres forwards Victor Olofsson and Tage Thompson each scored twice in a 5-3 win over the Philadelphia Flyers. Kevin Hayes and Noah Cates each had a goal and an assist for the Flyers.

TSN: Carolina Hurricanes goaltender Frederik Andersen will undergo an MRI for a lower-body injury suffered during Saturday’s loss to the Colorado Avalanche.

CBS SPORTS: Avalanche defenseman Devon Toews is dealing with “some nagging things” and could sit for Monday’s game against the Capitals.

TSN: Montreal Canadiens forward Michael Pezzetta will have a hearing with the NHL’s department of player safety regarding an illegal check to the head of Capitals winger T.J. Oshie on Saturday.

MONTREAL HOCKEY NOW: Speaking of the Canadiens, they’ve set an NHL record for the most man-games lost to injury with 700.

THE ATHLETIC: Pierre LeBrun reports Donald Fehr’s tenure as executive director of the NHL Players Association could come to an end before next season.

A report released Friday by the law firm Cozen O’Connor cleared Fehr and the PA of any individual or systemic wrongdoing over their handling of the Kyle Beach investigation. That report, however, has come under criticism, raising speculation about concerns among the PA membership.

LeBrun reports Fehr, 74, was facing pressure to come up with a succession plan prior to the report’s release. That process could be accelerated, especially with another round of collective bargaining with the NHL coming in five years’ time.

← Maple Leafs Need Matthews At His Best To Achieve Overdue Playoff Success NHL Rumor Mill - April 18, 2022 →
We use cookies on our website to give you the most relevant experience by remembering your preferences and repeat visits. By clicking “Accept”, you consent to the use of ALL the cookies.
Do not sell my personal information.
Cookie SettingsAccept
Manage consent