In his sixth NHL season, Auston Matthews is on a torrid goal-scoring pace not seen in the league for some time.

With 58 goals in 69 games entering Sunday’s game against the New York Islanders, the 24-year-old Toronto Maple Leafs center is poised to become the first player to score 60 goals in a season since Tampa Bay Lightning captain Steven Stamkos in 2011-12. With seven games remaining in the schedule, he also has a shot at becoming the first player to reach 65 goals since Washington Capitals superstar Alex Ovechkin in 2007-08.

Matthews has already secured his spot in Leafs history by establishing their single-season goal-scoring record. Having become the first player in franchise history to win the Maurice Richard Trophy with 41 goals in 52 games last season, he seems likely to take home that honor for the second straight year.

Thanks to his goal-scoring exploits, Matthews must be considered a serious challenger for the Hart Memorial Trophy as the league’s most valuable player. He could become the first Leaf to win that award since Teeder Kennedy in 1955. 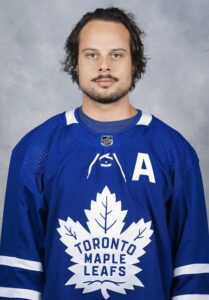 Leafs Nation is giddy over Matthews’ performance and they have every right to be. He’s been a bonafide star since winning the Calder Memorial Trophy as rookie of the year in 2016-17. Injuries prevented him from reaching the 50-goal plateau earlier in his career but his offensive brilliance was never in doubt.

This season, however, Matthews has taken his game to a higher level, establishing himself as his generation’s best goal scorer. Of his 58 goals, 43 were scored at even strength. He’s their puck possession leader with a shot-attempts percentage of 59.8. The Leafs center has also improved his defensive game, tied for the league lead in takeaways (86) with Vegas Golden Knights defenseman Alex Pietrangelo. He’s also solid in the faceoff circle, winning 56.6 percent of his draws.

The problem is, none of Matthews’ accomplishments this season will matter if the Leafs fail to get past the opening round of the playoffs.

Matthews could win the Hart Trophy and the Ted Lindsay Award along with the Richard Trophy when the NHL Awards are handed out this summer and it won’t mean squat to Leafs fans if they suffer another first-round exit.

Even if the Leafs advance past the first round for the first time since 2004, Matthews’ regular-season efforts won’t count for much if they get bounced in the second round. Nothing less than at least reaching the Eastern Conference Final will satisfy long-suffering Leafs fans, and even then, there will be some grumbling that they didn’t go all the way and win the Stanley Cup.

Everyone knows the Leafs’ last Cup win was in 1967. It’s the longest championship drought in league history. Generations of Leafs fans have been born without seeing their favorite team win hockey’s holy grail. Every year, the pressure increases, especially when the Leafs have rosters with the capability of ending that streak.

The Leafs dominated their all-Canadian division during last season’s COVID-shortened campaign. Squaring off in the opening round against the lowly Montreal Canadiens, they held a 3-1 stranglehold on the series before the Canadiens roared back with three straight wins to take the series, sending the Leafs and their fans into an offseason of bitter disappointment.

Being among the Leafs’ core players, Matthews caught his fair share of criticism from Toronto fans and pundits. For good reason, too, as he was held to just one goal and five points by the Canadiens checkers and goaltender Carey Price.

Matthews’ stellar performance this season has served as a balm to soothe the jangled nerves of Leafs fans, but it’s also raised expectations. With the 2022 Stanley Cup Playoffs approaching, he will be expected to pilot his club toward that long-overdue championship glory. John Tavares may be the team captain, but the burden of leadership is truly on Matthews’ shoulders.

Yes, other members of the Leafs’ core – Tavares, Mitch Marner, William Nylander, Morgan Rielly, Jack Campbell – must also step up. But Matthews’ showstopping production this season has thrust him into a much brighter spotlight. He will be expected to carry this club to its first opening-round series victory in nearly 20 years and its first Stanley Cup in over a half-century.

If Matthews isn’t at his very best this spring, everything he accomplished during the regular season will be overshadowed by his postseason failure and that of his teammates.

The calls for change from the restless denizens of Leafs Nation will grow louder, perhaps leading to a change in management or coaching, maybe even a roster shakeup. Matthews probably wouldn’t be part of the latter but who can say what could happen following another discouraging postseason finish in Toronto?

All that can be avoided, or at least the odds of it happening greatly reduced if Matthews’ outstanding regular-season effort carries over into the 2022 postseason.

Failure is no longer an option for Matthews and the Leafs. He and his teammates must rise to the occasion this spring or remain damned as playoff choke artists.

← Sunday NHL Rumor Roundup - April 17, 2022 NHL Morning Coffee Headlines - April 18, 2022 →
We use cookies on our website to give you the most relevant experience by remembering your preferences and repeat visits. By clicking “Accept”, you consent to the use of ALL the cookies.
Do not sell my personal information.
Cookie SettingsAccept
Manage consent