NHL.COM: Nikita Kucherov had a five-point performance while teammates Steven Stamkos and Victor Hedman each collected four points as the Tampa Bay Lightning doubled up the Florida Panthers 8-4, snapping the latter’s 13-game winning streak. Kucherov, Stamkos and Nicholas Paul each tallied two goals for the Lightning, who sit in third place in the Atlantic Division with 106 points. Sam Reinhart scored twice for the Panthers, who still maintain a four-point lead over the Colorado Avalanche for first place in the overall standings with 120 points.

Speaking of the Avalanche, they dropped their fourth straight game by falling 4-1 to the Winnipeg Jets. Connor Hellebuyck made 30 saves for his 200th career victory while Kyle Connor scored his 45th goal of the season.

SPECTOR’S NOTE: The absence of core players Gabriel Landeskog, Mikko Rantanen and Devon Toews to injury and illness has contributed to the Avs’ recent slide. The Avs could also be experiencing difficulty remaining motivated playing in meaningless games this late in the regular season. 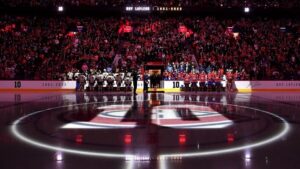 The Boston Bruins got two goals from Patrice Bergeron and Erik Haula to defeat the Montreal Canadiens 5-3. However, this match was overshadowed by an emotional pre-game ceremony honoring the life and legacy of Canadiens icon Guy Lafleur, who passed away on Friday at age 70. Montreal fans followed the video tribute with a 10-minute standing ovation and chants of “Guy! Guy! Guy!” The Bruins (103 points) hold a three-point lead over the Washington Capitals for the first Eastern Conference wild-card berth.

SPECTOR’S NOTE: Lafleur meant so much to Montrealers, Quebecers and Canadiens fans around the world. The outpouring of emotion following his death is a testament to how his exciting style of play resonated with fans to this day. The province of Quebec announced it will stage a national funeral for Lafleur. His body will lie in state at the Bell Centre for two days before the funeral on May 3.

Meanwhile, the Capitals dropped a 4-3 decision to the Toronto Maple Leafs on a shootout goal by Alex Kerfoot. Leafs star Auston Matthews collected two assists but remains at 58 goals on the season. Capitals captain Alex Ovechkin left the game with an upper-body injury in the third period after crashing into the boards following a breakaway scoring attempt. The club had no immediate word on his condition. The Leafs are in second place in the Atlantic with 111 points.

SPECTOR’S NOTE: Leafs captain John Tavares and defenseman Timothy Liljegren missed the game. Tavares was given the night off while Liljegren is dealing with a minor issue.

Anaheim Ducks captain Ryan Getzlaf picked up an assist in his final NHL game but his club dropped a 6-3 decision to the St. Louis Blues. Ivan Barbashev had a goal and two assists while Vladimir Tarasenko, Jordan Kyrou and Justin Faulk each collected two points for the Blues, who sit in third place in the Central Division with 109 points. Blues center Tyler Bozak returned to action for the first time since being sidelined by a lower-body injury on March 13.

SPECTOR’S NOTE: Getzlaf is hanging up his skates after 17 seasons with the Ducks. He’s their franchise leader in points, assists, playoff scoring and games played and has been their captain for the past 12 seasons. He also helped them win their first-ever Stanley Cup in 2007 and finishes with 1,019 points. Don’t be surprised if he ends up in a front-office job with the Ducks.

An overtime goal by Dmitry Kulikov lifted the Minnesota Wild over the Nashville Predators 5-4. Joel Erikson Ek scored twice and picked up an assist while Kirill Kaprizov and Kevin Fiala each had two points. The Wild are tied with the Blues but hold second place in the Central with a game in hand. Filip Forsberg and Mikael Granlund each had three points as the Predators hold the first wild-card berth in the Western Conference with 94 points.

The Vegas Golden Knights’ playoff hopes suffered a blow after blowing a 4-2 lead in the third period to fall 5-4 to the San Jose Sharks on a shootout goal by Thomas Bordeleau. Nick Bonino and Timo Meier scored in the final minutes of regulation to tie the game. The Golden Knights (90 points) gained a point to sit three back of the Dallas Stars for the final Western wild-card spot.

SPECTOR’S NOTE: Both clubs each have three games remaining but the Golden Knights need the extra point a win would’ve given them to draw closer to the Stars. Vegas goaltender Robin Lehner dressed for the game amid reports he requires knee surgery but was the backup to Logan Thompson. William Carrier returned to the Golden Knights lineup for the first time since being sidelined by a lower-body injury on March 26.

The Carolina Hurricanes downed the New York Islanders 5-2. With 112 points, they’ve opened a four-point lead over the New York Rangers for first place in the Metropolitan Division. It was a costly victory, however, as goaltender Antti Raanta left the game with a lower-body injury in the second period.

SPECTOR’S NOTE: Hurricanes starter Frederik Andersen is also sidelined with a lower-body injury. They’re hoping to have him back in the lineup when the playoffs begin next week.

Philadelphia Flyers rookie Noah Cates scored twice and collected an assist while Martin Jones made 37 saves to upset the Pittsburgh Penguins 4-1. The loss leaves the Penguins (101 points) holding a one-point lead over the Capitals for third place in the Metro Division.

The Edmonton Oilers missed an opportunity to clinch second place in the Pacific Division by falling 5-2 to the Columbus Blue Jackets. Jakub Voracek and Oliver Bjorkstrand each had three-point performances for the Blue Jackets. Oilers captain Connor McDavid collected two assists and holds a three-point lead over the Panthers’ Jonathan Huberdeau for first place in the NHL scoring race with 118 points. The Oilers hold a two-point lead over the third-place Los Angeles Kings in the Pacific with 98 points.

SPECTOR’S NOTE: Oilers defenseman Darnell Nurse missed this contest as he’s listed as day-to-day with a minor lower-body injury. Blue Jackets forward Yegor Chinakhov returned to action after being sidelined by an upper-body injury since April 2.

Detroit Red Wings goalie Alex Nedeljkovic had a 17-save shutout to blank the New Jersey Devils 3-0. Tyler Bertuzzi had a goal and an assist.

← Sunday NHL Rumor Roundup - April 24, 2022 NHL Rumor Mill - April 25, 2022 →
We use cookies on our website to give you the most relevant experience by remembering your preferences and repeat visits. By clicking “Accept”, you consent to the use of ALL the cookies.
Do not sell my personal information.
Cookie SettingsAccept
Manage consent