Well, it’s that time again when those of us who make a living covering the NHL attempt to predict which teams will win each postseason series. We’ll look at the stats, try to put personal biases aside, and make our best guesses.

Some years, we’ll look really shrewd by getting more selections right than wrong. In others, we’ll end up looking silly as our predictions go off the rails.

That’s the beauty of playoff competition. Some series will unfold as we expect but others will see upsets that few saw coming. The Montreal Canadiens’ underdog run to the 2021 Stanley Cup Final serves as a perfect example. 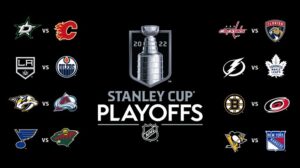 I’ve never taken this exercise too seriously and just have fun with this. No matter how much player and team info I digest, no matter how I crunch the stats data, it still comes down to gut feeling.

Without further ado, here’s my brief preview and predictions for the opening round of the Stanley Cup Final. Feel free to offer up your take in the comments section below.

The back-to-back defending Stanley Cup champion Lightning remains a dangerous team. Nevertheless, the high-scoring Leafs are long overdue to win a playoff series. Time for Auston Matthews and company to finally prove themselves in postseason play. Leafs in seven.

A clash between a rising power and an aging one that hasn’t won a playoff series since 2018. Never take Penguins stars Sidney Crosby and Evgeni Malkin lightly. Rangers starter Igor Shesterkin has little playoff experience but he should carry his club to victory. Rangers in six.

Career-best years from Roman Josi, Filip Forsberg, Matt Duchene and goalie Juuse Saros carried the Predators into the playoffs. Saros, however, is questionable with a leg injury. The Avs struggled down the stretch but stars like Nathan MacKinnon and Cale Makar will get the job done. Avalanche in five.

This could be the most entertaining series of the opening round. The Wild and Blues were in a tight race for second place in the Central. Minnesota has experienced goaltending in Marc-Andre Fleury and Cam Talbot but the Blues’ powerful offense will carry them to victory. Blues in seven.

The Stars are a team in transition as younger players like Jake Oettinger and Jason Robertson take on more important roles. They’ll put up a good fight but won’t be any match for the Flames’ well-balanced game led by Johnny Gaudreau and Matthew Tkachuk. Flames in five.

The Oilers won 26 of their last 38 games under interim bench boss Jay Woodcroft. Connor McDavid and Leon Draisaitl provide the Oilers with a strong scoring punch. The rebuilding Kings will feel the absence of veteran defenseman Drew Doughty. Oilers in five.

← Sunday NHL Rumor Roundup - May 1, 2022 NHL Morning Coffee Headlines - May 2, 2022 →
We use cookies on our website to give you the most relevant experience by remembering your preferences and repeat visits. By clicking “Accept”, you consent to the use of ALL the cookies.
Do not sell my personal information.
Cookie SettingsAccept
Manage consent