The Lightning swept the Panthers, the Avalanche take a commanding lead in their series with the Blues, and much more in today’s NHL morning coffee headlines.

NHL.COM: The Tampa Bay Lightning rode a 49-save shutout by Andrei Vasilevskiy to blank the Florida Panthers 2-0 in Game 4 to sweep their second-round series. Pat Maroon and Ondrej Palat scored in the third period for the Lightning, who had two second-period goals overturned on challenges by Panthers head coach Andrew Brunette. The Lightning will face the winner of the Carolina Hurricanes – New York Rangers series in the Eastern Conference Finals. 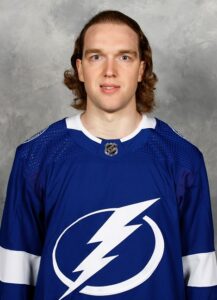 SPECTOR’S NOTE: This was a well-deserved sweep by Tampa Bay as they did a magnificent job squeezing the life out of Florida’s league-leading offense, holding them to just three goals in four games. Vasilevskiy was outstanding in this series while the Lightning’s defensive game (especially their shot-blocking) neutralized the Panthers’ scorers.

For the Panthers, this was a disappointing finish to a regular season that saw them take home the Presidents’ Trophy for the first time in franchise history. They also won their first playoff series in 26 years by eliminating the Washington Capitals in the opening round. Those are accomplishments to build on going forward. They must improve their defensive game and bring some more grit into their lineup.

This game may have been the last for Joe Thornton as an NHL player. The 42-year-old Panthers center appeared in just 34 games during this season and made his 2022 postseason debut in Game 4.

Prior to Game 4, Brunette disputed an uncorroborated report claiming several of his players were out partying in a Tampa Bay strip club following their Game 3 loss on Sunday. “Check your sources. That was not the case last night,” he said.

A hat trick by Nazem Kadri powered the Colorado Avalanche to a 6-3 victory over the St. Louis Blues in Game 4 of their second-round series. David Perron tallied twice for the Blues. With a commanding 3-1 series lead, the Avalanche can close things out on Wednesday in Game 5 back in Colorado.

SPECTOR’S NOTE: Overshadowing this contest were reports that the St. Louis police were investigating racist threats aimed at Kadri stemming from his collision with Jordan Binnington in Game 3 that sidelined the Blues goaltender for the remainder of the series. Kadri indicated he’s been dealing with such vitriol throughout his career and used it as motivation for this game. “For those that hate, that was for them,” he said.

Avalanche captain Gabriel Landeskog said he’d like the Blues to help defuse the public anger toward Kadri, calling the collision with Binnington accidental.

Kadri wasn’t happy with Blues coach Craig Berube for his remarks following Game 3 suggesting the Avalanche center deliberately intended to injure Binnington. “I guess he’s never heard of bulletin board material,” said Kadri. Berube also drew criticism from fans and pundits on social media for declining to comment about the racist threats aimed at Kadri prior to Game 4.

THE NEWS & OBSERVER: Carolina Hurricanes goaltender Frederik Andersen spent 20 minutes practicing with his teammates yesterday. He’s been sidelined since April 16 with a lower-body injury. Thanks to the play of backup Antti Raanta, the Hurricanes can afford to allow Andersen as much time as necessary to make a full recovery.

SPECTOR’S NOTE: No word yet as to whether Andersen will return to action in this series.

SPECTOR’S NOTE: Rangers coach Gerard Gallant indirectly referenced Reaves following Game 3 when he said his club had a guy who could handle the Hurricanes if that’s how they wanted to play. We’ll find out tonight what impact Reaves might have in Game 4.

CALGARY SUN: Flames winger Milan Lucic said he wasn’t trying to run Edmonton Oilers goaltender Mike Smith when the two collided in Game 3 of their series. Lucic received a major and a match penalty for charging but said he was trying to stop when the incident occurred. He added if he actually was charging Smith, “we both wouldn’t be playing tomorrow.” Game 4 is tonight in Edmonton with the Oilers leading the Flames two games to one.

TSN: Speaking of the Flames, they’re moving their AHL affiliate from Stockton to Calgary starting next season.

← NHL Rumor Mill - May 23, 2022 NHL Rumor Mill - May 24, 2022 →
We use cookies on our website to give you the most relevant experience by remembering your preferences and repeat visits. By clicking “Accept”, you consent to the use of ALL the cookies.
Do not sell my personal information.
Cookie SettingsAccept
Manage consent