A look at the Panthers’ potential offseason plans plus the latest on the Islanders and Blackhawks in today’s NHL rumor mill.

ESPN.COM: Kristen Shilton previews the Florida Panthers’ potential offseason plans after being swept by the Tampa Bay Lightning from the second round of the 2022 Stanley Cup Playoffs.

The first will be deciding if Andrew Brunette becomes their full-time head coach or is replaced. Brunette took over on an interim basis in October after Joel Quenneville stepped down. He’s a finalist for the Jack Adams Award as coach of the year after guiding the Panthers to their first-ever Presidents’ Trophy with the NHL’s best record and their first playoff series victory since 1996 with their first round elimination of the Washington Capitals.

SPECTOR’S NOTE: Brunette’s done enough to earn the job full-time. However, general manager Bill Zito could be tempted into hiring a better-experienced bench boss like Barry Trotz, John Tortorella, Alain Vigneault, Rick Bowness or Paul Maurice. It’ll be interesting to see how this plays out. 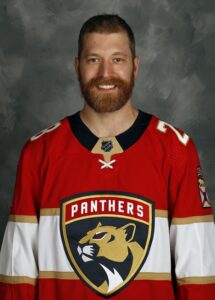 Shilton also felt the Panthers will have to replace Claude Giroux and Ben Chiarot. They acquired the duo before this year’s trade deadline. Both are unrestricted free agents this summer and it’s unlikely they’ll re-sign long-term with the Panthers.

SPECTOR’S NOTE: Cap space will be an issue for the Panthers. According to Cap Friendly, they have $78.6 million invested in 16 players for 2022-23. That includes over $6.5 million in dead cap space due to the buyouts of Keith Yandle and Scott Darling.

In addition to Giroux and Chiarot, Joe Thornton and Mason Marchment are also eligible for UFA status in July. The 42-year-old Thornton is facing retirement and won’t be back. Marchment, however, blossomed into a reliable middle-six forward this season. The 27-year-old winger would be more affordable and worthwhile to retain.

Philly Hockey Now’s Sam Carchidi wonders what the future holds for Giroux. He was a great fit with the Panthers but will be expensive to sign. Carchidi pondered whether Giroux might return to the cap-strapped Flyers or perhaps return to his hometown of Ottawa and sign with the Senators.

The latter theory, by the way, was based on a rumor out of Ottawa that depended on whether Giroux won the Stanley Cup with the Panthers. It could also be applied to the Flyers. Both scenarios could be dashed if playing for a contender becomes the determining factor in where he decides to continue his NHL playing career.

Shilton expects Zito will spend the summer upgrading the Panthers’ blueline. She also believes it’ll be on whoever is their coach next season to improve their forwards’ defensive game.

As for improving the defense corps, that could take dollar-for-dollar trades considering how little cap room Zito has to work with for next season. Maybe he tries to move forward Patric Hornqvist ($5.3 million cap hit) to a club that isn’t on his eight-team no-trade list. Perhaps Zito shops a forward lacking no-trade protection like Sam Bennett ($4.425 million) or Anthony Duclair ($3 million).

LATEST ON THE ISLANDERS AND BLACKHAWKS

THE ATHLETIC: In his latest mailbag segment, Kevin Kurz was asked about the futures of New York Islanders forwards Oliver Wahlstrom, Anthony Beauvillier and Josh Bailey.

Kurz felt the Islanders still believe Wahlstrom can develop into a top-six forward despite his struggles this season. However, he sees Beauvillier as a possible trade chip to bring in a more consistent winger or a left-shot defenseman to pair with Noah Dobson.

Bailey, meanwhile, could still attract interest in the trade market though the winger’s $5 million salary-cap hit is a bit inflated. His contract has just two years remaining which makes it more palatable. Clubs with depth issues at forward, such as the Dallas Stars, Edmonton Oilers or Calgary Flames, could use someone with Bailey’s experience and two-way skills.

SPECTOR’S NOTE: Wahlstrom won’t be going anywhere as the Isles will want to see if his performance improves under new head coach Lane Lambert. Beauvillier, 24, has shown the potential to be a more reliable top-six scorer. He’s under contract for two more years but teams could balk at his $4.125 million annual average value.

Bailey lacks no-trade protection but his age (32) and that $5 million cap hit could make him difficult to move. I don’t see him as a fit cap-wise with Flames, Oilers and Stars given the limited room they’ll have once they’re done signing their key free agents this summer. Still, there could be other clubs with the cap space seeking someone with his skills.

The Blackhawks don’t have many players who could fetch a first-rounder. Someone will have to step up with a big offer for Davidson to consider shopping winger Alex DeBrincat. The only way Patrick Kane gets moves is if he requests a trade.

SPECTOR’S NOTE: Roumeliotis suggested Connor Murphy as a “maybe” in that category. His long injury history, however, hurts his trade value.

← NHL Morning Coffee Headlines - May 24, 2022 NHL Morning Coffee Headlines - May 25, 2022 →
We use cookies on our website to give you the most relevant experience by remembering your preferences and repeat visits. By clicking “Accept”, you consent to the use of ALL the cookies.
Do not sell my personal information.
Cookie SettingsAccept
Manage consent