The Oilers eliminate the Flames, the Hurricanes push the Rangers to the brink of elimination, updates on the Avalanche and Blues and more in today’s NHL morning coffee headlines.

NHL.COM: The Edmonton Oilers are heading to the Western Conference Finals for the first time in 16 years. Connor McDavid’s overtime goal gave the Oilers a 5-4 victory over the Calgary Flames in Game 5 to take their best-of-seven second-round series four games to one. 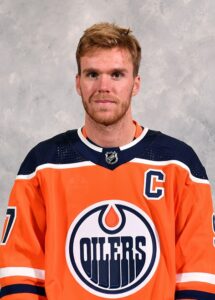 Edmonton overcame a 2-0 deficit and held a 3-2 lead before Calgary battled back to regain the lead 4-3. Oilers defenseman Evan Bouchard tied the game 4-4 late in the second period. Flames forward Blake Coleman appeared to score the go-ahead goal late in the third but it was overruled on a controversial video review claiming he kicked the puck into the net.

The Oilers await the winner of the Colorado Avalanche-St. Louis Blues series. Game 6 of that series is tonight with the Avalanche up three games to two.

SPECTOR’S NOTE: I don’t have a dog in this fight but that didn’t look like a kicking motion on Coleman’s part. His skate made contact with the pick but there was incidental contact by an Oilers defenseman as Coleman was heading toward the net. Just my two cents. The league’s video review folks believed differently.

While that disallowed goal cost the Flames this game, their sloppy defensive play and uncharacteristic shaky goaltending from Jacob Markstrom throughout this series led to their postseason demise. They struggled to contain Edmonton’s offense, especially McDavid and Draisaitl. Had they won this game, I doubt they would’ve gone on to take the series.

The Carolina Hurricanes have the New York Rangers on the brink of elimination following a 3-1 victory in Game 5 of their second-round series. Teuvo Teravainen snapped a 1-1 tie in the second period while Andrei Svechnikov’s third-period goal put the game out of reach. The Hurricanes can advance to the Eastern Conference Finals with a win in Game 6 on Saturday in New York.

SPECTOR’S NOTE: The Hurricanes have yet to win a road game in this postseason but they’ve been dominating on home ice. They outshot the Rangers 34-17, controlled this game at even strength, scored on the power play and shorthanded, and apart from Mika Zibanejad’s goal overwhelmed the Rangers’ top line. If they can carry over that effort into Game 6, they’ll have a date with the Tampa Bay Lightning starting next week.

THE DENVER POST: The Colorado Avalanche hope to avoid a Game 7 when they face off against the St. Louis Blues in Game 6 of their second-round series tonight. Head coach Jared Bednar believes his club will put their blown lead in Game 5 behind them and play with confidence in tonight’s contest.

SPECTOR’S NOTE: The Avalanche dominated the first 40 minutes of Game 5 but took their foot off the gas and tried to protect their lead in the third period. That enabled the Blues to rally back twice, setting the stage for their dramatic overtime victory.

TSN: Don’t expect St. Louis Blues defenseman Torey Krug to return to action in tonight’s game. He’s been sidelined by a lower-body injury since Game 3 of their first-round series with the Minnesota Wild. Blues coach Craig Berube indicated Krug would also be out for Game 7 if this series goes that far.

DETROIT HOCKEY NOW: Red Wings captain Dylan Larkin has changed agents, hiring Pat Brisson to negotiate his next contract. Larkin is slated to become an unrestricted free agent in 2023. The Wings can sign him to a contract extension on July 13.

SPECTOR’S NOTE: In other words, don’t expect either guy to be signing with NHL teams this summer as free agents.

← NHL Rumor Mill - May 26, 2022 NHL Rumor Mill - May 27, 2022 →
We use cookies on our website to give you the most relevant experience by remembering your preferences and repeat visits. By clicking “Accept”, you consent to the use of ALL the cookies.
Do not sell my personal information.
Cookie SettingsAccept
Manage consent