Could the Panthers try to trade Sergei Bobrovsky? Can the Canucks afford Brock Boeser? Which LA Kings could become trade candidates? Are the Senators still willing to trade their 2022 first-round pick? Find out in today’s NHL rumor mill.

COULD THE PANTHERS SHOP BOBROVSKY?

NHL WATCHER: On a recent “32 Thoughts” podcast, Sportsnet’s Elliotte Friedman suspected the Florida Panthers tried hard to trade Sergei Bobrovsky during the season or lay the groundwork to do so. He doesn’t know if it’s possible to move the goaltender but he heard the Panthers really worked on it to see if it was possible. 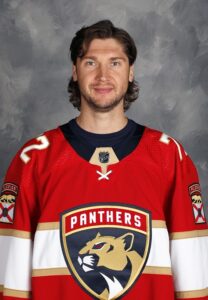 SPECTOR’S NOTE: Good luck with that. Bobrovsky, 33, carries a $10 million annual salary-cap hit through 2025-26. He also has a full no-movement clause until 2024-25 when the no-trade portion is modified to a 16-team no-trade list.

The only way I see this happening is for the Panthers to retain between $3 million to $5 million of that annual cap hit. That’s assuming Bobrovsky is willing to accept a trade. If he does, it’ll be to a limited number of clubs.

Anything can happen, of course, but I wouldn’t hold my breath anticipating a Bobrovsky trade this summer.

VANCOUVER HOCKEY NOW: Rob Simpson reports Canucks president of hockey operations Jim Rutherford dismissed speculation his club would have to trade Brock Boeser or negotiate off his $7.5 million qualifying offer. Rutherford indicated they can afford to fit the 25-year-old winger’s QO within their budget for 2022-23. “We are definitely not pressured to trade him for financial reasons,” he said.

Simpson said that doesn’t suggest the Canucks will qualify Boeser by the July 11 deadline or that any decisions have been reached about the winger’s future in Vancouver. Rutherford said they’ll see how things work out and see if a fair deal can be reached for Boeser and the team.

SPECTOR’S NOTE: Boeser is a restricted free agent with arbitration rights this summer. His performance was below expectations this season in part because of injuries and concern over his father’s battle with dementia. The two sides could require arbitration to resolve the issue but I daresay they’ll try to avoid that possibility.

Cap Friendly indicates the Canucks have $69.4 million invested in just 13 players for 2022-23. If necessary, they can exceed the $82.5 million cap by $3.5 million with all-but-retired Micheal Ferland on long-term injury reserve.

Nevertheless, fitting in Boeser’s $7.5 million qualifying offer could mean Rutherford ends up shipping out a salaried player to free up cap space. Maybe he parts with J.T. Miller ($5.25 million cap hit) if the two sides fail to agree to a contract extension. Perhaps he puts Bo Horvat or Conor Garland on the trade block. Maybe he tries to move defenseman Oliver Ekman-Larsson.

On the other hand, he and Boeser could agree to a new contract at a lower cap hit than his qualifying offer. Depending on how much of a reduction it is, Rutherford might not have to employ a drastic measure like moving Miller or Horvat.

THE ATHLETIC: Lisa Dillman included Gabriel Vilardi, Alex Iafallo and Sean Durzi on her list of potential Los Angeles Kings trade candidates. She also didn’t rule out the possibility of general manager Rob Blake listening to trade offers for Quinton Byfield or Arthur Kaliyev but doubted either guy will be moved.

There’s been speculation Blake might consider using his 2022 first-round pick to add an experienced player to the roster. However, Dillman doesn’t see him going that route, pointing out the Kings prefer to hang onto their high draft picks.

SPECTOR’S NOTE: Blake was rumored to be interested in Arizona Coyotes blueliner Jakob Chychrun this season. He has the depth in promising young players and prospects to make a decent offer and the cap space to take on his $4.6 million cap hit.

The Coyotes reportedly want a first-round pick as part of the return. Maybe Blake decides to part with his pick (which sits outside the top-16) if it’ll bring Chychrun to Los Angeles.

OTTAWA SUN: Bruce Garrioch reports Senators GM Pierre Dorion told TSN 1200 is willing to move his 2022 first-round pick if it’ll fetch an impact player to help the club. He’d like to add a top-four defenseman and some depth up front, though the latter could be addressed internally. Dorion also indicated he’s not interested in acquiring a player who could depart via the UFA market in a year or two.

← NHL Morning Coffee Headlines - May 26, 2022 NHL Morning Coffee Headlines - May 27, 2022 →
We use cookies on our website to give you the most relevant experience by remembering your preferences and repeat visits. By clicking “Accept”, you consent to the use of ALL the cookies.
Do not sell my personal information.
Cookie SettingsAccept
Manage consent