Where could Barry Trotz end up after being fired as Islanders head coach? Who could the Isles hire as his replacement? Check out the latest in today’s NHL rumor mill.

THE ATHLETIC: Kevin Kurz reported on the New York Islanders’ surprising decision to fire head coach Barry Trotz on Monday. He speculates Trotz’s handling of young forward Oliver Wahlstrom and the reduction in Mathew Barzal’s role and ice time may have factored into general manager Lou Lamoriello’s decision to part ways with Trotz. 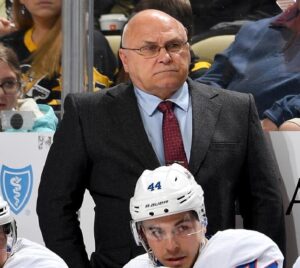 A source with knowledge of the Islanders’ dressing room pushed back against Lamoriello’s claim the decision was made without input from the players. The source said making that move after conducting the players’ exit interviews indicated the Isles GM was listening to their comments.

Kurz speculates Trotz’s physically demanding style of play in a season that started with a 13-game road trip followed by a COVID outbreak might have contributed to the club’s disappointing performance. The coach himself also pondered that possibility.

NYI HOCKEY NOW: Stefen Rosner also weighed in on the next Islanders head coach, claiming he’s been told Lamoriello has looked into Paul Maurice and John Tortorella. He also speculated Peter DeBoer could be an option if he’s fired by the Vegas Golden Knights.

SPECTOR’S NOTE: Lamoriello gave no timetable for naming Trotz’s replacement. Nevertheless, it wouldn’t be surprising if he reaches a decision before the 2022 NHL Draft in early July.

It’ll be interesting to see whether Lamoriell opts for someone with plenty of NHL experience and success, promotes Lambert, or considers an option outside the box for many observers. We probably won’t get any indication of which way the always-secretive Isles GM will go before he announces his choice.

Speaking of DeBoer, Vegas Hockey Now’s Owen Krepps wondered if he’ll join Trotz among the ranks of unemployed NHL head coaches. If so, he suggested the Golden Knights might look at Trotz as a replacement.

SPECTOR’S NOTE: The Flyers replaced Alain Vigneault last December with Mike Yeo on an interim basis and are in the hunt for a new full-time head coach after announcing Yeo won’t return in the role next season.

Paul Maurice stepped down as Jets head coach in December. Assistant coach Dave Lowry was named interim bench boss but, like Yeo, won’t be returning in that role next season.

WINNIPEG SUN: Paul Friesen believes the Jets should be in pursuit of Winnipeg native Trotz. He cited his impressive record of success with the Islanders, as well as with the Washington Capitals and Nashville Predators.

PHILLY HOCKEY NOW: Sam Carchidi believes Trotz would be a perfect fit to revitalize the sorry-looking Flyers if he’s interested in the challenge.

DETROIT HOCKEY NOW: Kevin Allen suggested the Red Wings could be a landing spot for Trotz. He also indicated the Chicago Blackhawks are among the NHL teams seeking a new head coach.

SPECTOR’S NOTE: Trotz won’t be out of a job for long. He’s reportedly taking a couple of weeks to rest and ponder his next move. I won’t be surprised if he’s got a new coach gig before the end of June.

It could come down to whether he’d prefer to join a retooling team (or one that needs to retool) like the Jets or looks for the challenge of joining a rebuilding squad like the Wings.

← NHL Morning Coffee Headlines - May 10, 2022 NHL Morning Coffee Headlines - May 11, 2022 →
We use cookies on our website to give you the most relevant experience by remembering your preferences and repeat visits. By clicking “Accept”, you consent to the use of ALL the cookies.
Do not sell my personal information.
Cookie SettingsAccept
Manage consent