More speculation over whether the Oilers can afford to retain Evander Kane, some potential trade destinations for Kevin Fiala and the latest on the Leafs in today’s NHL rumor mill.

CAN THE OILERS AFFORD TO RE-SIGN EVANDER KANE?

SPORTSNET/THE EDMONTON JOURNAL: Mark Spector and Jim Matheson wonder if the Oilers can afford to re-sign Evander Kane after this season. 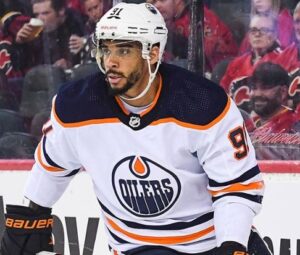 Signed in January by the Oilers as a free agent to a one-year, $2.1 million contract after the San Jose Sharks terminated his previous deal, the 30-year-old Kane had 22 goals and 39 points in 43 regular-season games and 12 goals in as many postseason contests thus far.

Asked during a recent press conference about re-signing Kane, Oilers general manager Ken Holland said he can sign anybody but someone else would have to go.

As I’ve mentioned before, the outcome of Kane’s grievance with the Sharks over his contract termination could determine how much it could cost the Oilers to keep him. His previous contract was worth $7 million annually. If the arbitrator’s ruling goes in Kane’s favor and he gets, say, $5 million annually, perhaps he’ll give the Oilers a break and agree to a multi-year deal worth between $2 million and $3 million.

Kane’s off-ice financial problems are well-documented and he could seek the biggest contract he can find to pay off his creditors. On the other hand, the chance to ride shotgun on Connor McDavid’s line in Edmonton for the next four years could be a strong incentive to accept a lesser deal.

WHAT’S THE MARKET FOR KEVIN FIALA?

THE ATHLETIC: Michael Russo and Harman Dayal recently examined the trade market for Kevin Fiala. He’s a restricted free agent with arbitration rights coming off a one-year, $5.1 million contract and due for a big raise following his career-best 85-point performance. However, Wild’s limited cap space for 2022-23 could see him get traded if they can’t afford to keep him.

SPECTOR’S NOTE: Wild general manager Bill Guerin could attempt to make a cost-cutting trade to free up the necessary cap room to re-sign Fiala. Failing that, he’ll have no choice but to shop the winger, whose production this season significantly boosts his trade value. A first-rounder would likely be the centerpiece of the return along with a top prospect or a good, young (and affordable) NHL-ready player.

Those clubs mentioned by Russo and Dayal are all in need of a top-six scoring winger. The Senators reportedly had a prior interest in Fiala. They could try again if they believe they can get him signed to a reasonable long-term deal.

THE ATHLETIC: Jonas Siegel and James Mirtle are uncertain over whether Jack Campbell and Jake Muzzin will return with the Toronto Maple Leafs next season. Campbell is slated to become an unrestricted free agent in July while they recently suggested Muzzin as a possible cost-cutting candidate.

Campbell loves playing in Toronto but the thin market for goaltenders this summer could make it difficult for the cap-strapped Leafs to outbid other clubs, like the New Jersey Devils, for his services. Moving Muzzin, meanwhile, would remove some key elements that he brings to their defense corps.

Justin Holl, Alex Kerfoot, Wayne Simmonds, Colin Blackwell and Ilya Lyubushkin are others the Leafs could part ways with this summer. Simmonds, Holl and Kerfoot are signed through next season while the others are pending UFAs.

SPECTOR’S NOTE: I believe Campbell and the Leafs will reach an agreement on a new contract. If they don’t, GM Kyle Dubas could try to land Colorado’s Darcy Kuemper, Minnesota’s Marc-Andre Fleury or St. Louis’ Ville Husso via free agency.

Muzzin has two more years left on his contract with an annual cap hit of $5.625 million and a full no-trade clause. He could waive it if asked to do so depending on the destinations but I don’t think that’s going to happen. The Leafs will ride it out with him for another season and see how things shake out after that.

← NHL Morning Coffee Headlines - May 31, 2022 NHL Morning Coffee Headlines - June 1, 2022 →
We use cookies on our website to give you the most relevant experience by remembering your preferences and repeat visits. By clicking “Accept”, you consent to the use of ALL the cookies.
Do not sell my personal information.
Cookie SettingsAccept
Manage consent