Could the Sharks shop Erik Karlsson or Brent Burns this summer? Has Mark Scheifele requested a trade from the Jets?

WILL THE SHARKS TRADE KARLSSON OR BURNS THIS SUMMER?

SPORTSNET: Elliotte Friedman reports it appears there were some “very preliminary” trade talks this year involving San Jose Sharks defenseman Erik Karlsson and a couple of teams. He doesn’t believe those discussions got far but it seems the Sharks may recognize that having two elite, right-shot former Norris Trophy winners on their blueline hasn’t meshed as well as they’d hoped. That other defenseman, of course, is Brent Burns. 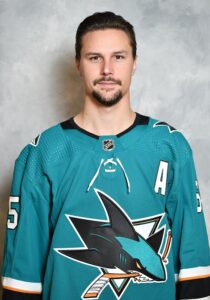 The Sharks are currently searching for a new general manager after long-time GM Doug Wilson stepped down for health reasons earlier this year. They still wish to contend but carrying Karlsson and Burns may be a luxury they cannot continue to afford in a salary-cap world.

Friedman pointed out Burns has less term on his contract than Karlsson. He feels the Sharks will listen if a rival club makes an offer they like for one of them.

NBC SPORTS BAY AREA: Sheng Peng last week also weighed in on the Sharks blueline with his takeaways of acting GM Joe Will’s remarks during his end-of-season press conference. He noted Will saying that players have choices, thoughts and prerogatives on where they are in their careers.

Peng noted that there were rumblings last summer suggesting Burns could be open to being traded to a contender. He also pointed out the long-time Sharks rearguard did little to quell that speculation during his exit interview.

SPECTOR’S NOTE: The Sharks are pressed for cap space next season with Cap Friendly showing them carrying over $73 million invested in 19 active players for 2022-23. That’s not counting any penalty they might receive if an arbitrator rules against them in Evander Kane’s grievance hearing over his contract termination in January.

Karlsson is signed through 2026-27 with an annual average value of $11.5 million and a full no-movement clause. Burns’ deal goes through 2024-25 with an $8 million annual cap hit and has a list of just three acceptable trade destinations.

Moving either guy this summer could prove difficult. The Sharks might be forced to retain some salary or take back a toxic contract to make it happen.

Karlsson and Burns aren’t the only defensemen the Sharks could part ways with during the offseason. There’s talk of buying out Marc-Edouard Vlasic and the remaining four years of his contract. Meanwhile, Radim Simek claims he got the runaround from management and the coaching staff when he questioned the decline in his playing time over the second half of the season.

WILL THE DEVILS TARGET FIALA IN THE OFFSEASON?

Jeff Marek reported the New Jersey Devils could target Kevin Fiala as GM Tom Fitzgerald looks to add an impact player in the offseason and is willing to shop his 2022 first-round pick. The 25-year-old Minnesota Wild winger netted 85 points this season and Marek believes the Devils see him skating alongside fellow Swiss forward Nico Hischier.

The Wild face a salary-cap crunch after this season with over $12 million in dead cap space from last summer’s buyouts of Zach Parise and Ryan Suter. That will make it challenging to sign Fiala as the 25-year-old winger is a restricted free agent with arbitration rights.

SPECTOR’S NOTE: Offering up that first-rounder could be enticing to Wild GM Bill Guerin if he knows he can’t afford to re-sign Fiala. The winger is completing a one-year, $5.1 million contract and is in line for a lucrative new deal.

If Fitzgerald can’t swing a trade, perhaps he’ll attempt to go the offer sheet route. Such moves are scarce and rarely successful but the Devils have the cap space to make it work provided Fiala is interested.

NO TRADE REQUEST FROM SCHEIFELE

Elliotte Friedman reports Mark Scheifele did not ask for a trade during his exit interview last week with Winnipeg Jets management. The 29-year-old center raises eyebrows earlier in the week with comments regarding his future. Friedman said we’ll see where everything goes in the offseason as the Jets have a lot of choices to make.

SPECTOR’S NOTE: Winnipeg pundits believe Scheifele could be on his way out while some Jets fans on social media have called for general manager Kevin Cheveldayoff to trade him. There’s a belief of a lack of accountability within the Jets’ dressing room over their disappointing performance this season.

Scheifele has two years remaining on his contract with an annual average value of $6.125 million plus a 10-team no-trade list. While his defensive game draws criticism, his scoring will ensure he attracts plenty of interest if Cheveldayoff shops him this summer.

← NHL Morning Coffee Headlines - May 8, 2022 NHL Morning Coffee Headlines - May 9, 2022 →
We use cookies on our website to give you the most relevant experience by remembering your preferences and repeat visits. By clicking “Accept”, you consent to the use of ALL the cookies.
Do not sell my personal information.
Cookie SettingsAccept
Manage consent