The 2022 Stanley Cup Final schedule is announced, the Stars trade Ben Bishop’s contract to Buffalo, Ryan Miller’s number to be retired by the Sabres, and more in today’s NHL morning coffee headlines.

NHL.COM: The 2022 Stanley Cup Final will begin on June 15 or June 18 depending on the outcome of the Eastern Conference Finals.

If the Tampa Bay Lightning win Game 6 on Saturday, they will face off against the Colorado Avalanche in Denver for Game 1 of the Cup Final on June 15.

If the Rangers win Game 6 and force a seventh and deciding game of the Conference Final on Monday, the winner of that game will meet the Avalanche in Colorado for Game 1 of the Cup Final on June 18.

WGR 550/THE DALLAS MORNING NEWS: The Dallas Stars traded the contract of Ben Bishop along with their 2022 seventh-round pick to the Buffalo Sabres for future considerations. A knee injury ended the 35-year-old goaltender’s career but he hasn’t officially retired because he remains under contract through 2022-23. 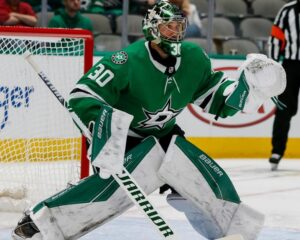 The Stars clear Bishop’s contract from their books, allowing them to avoid potential bonus overages in 2023-24. It also makes it easier for them to navigate the salary cap in 2022-23 without Bishop on long-term injury reserve.

As for the Sabres, the move allows them to get closer to next season’s $61 million salary-cap minimum by taking on Bishop’s $4.9 million cap hit for next season, though in actual salary they’ll pay him $3.5 million.

SPECTOR’S NOTE: Some readers might wonder why the Stars didn’t just retain Bishop and put him on LTIR to exceed the cap next season. Once they do that, however, they won’t be able to accrue salary-cap space.

That’s why we hear trade rumors of cap-strapped teams trying to peddle the contracts of permanently sidelined players to teams looking to reach the cap floor. What also made Bishop’s contract enticing to the Sabres is that his actual salary is less than his cap hit.

NHL.COM: Speaking of the Sabres, they will retire Ryan Miller’s No. 30 during a ceremony next season. Miller, 41, retired at the end of last season following an 18-season career, 11 of those spent with the Sabres from 2002-03 until traded to the St. Louis Blues before the 2014 trade deadline.

Miller is the Sabres’ all-time leader with 284 wins and sits second to Dominik Hasek with 28 shutouts. He backstopped them to consecutive Eastern Conference Finals in 2006 and 2007 and won the Vezina Trophy in 2010.

SPECTOR’S NOTE: Congratulations to Miller for this well-deserved honor.

SPORTSNET: Carey Price recently had a platelet-rich plasma injection as part of his treatment for the knee injury that still threatens to end his playing career. The 34-year-old Montreal Canadiens goaltender hopes to begin ramping up his training as he intends to start preparing to play. “I don’t think I will actually have an idea of how that’s going to look until later this summer when I’ve taken all the necessary steps to get back on the ice again.”

SPECTOR’S NOTE: The ongoing uncertainty over Price’s status will affect whatever decision they make regarding their goaltending for next season. They could end up shopping for help by placing him on LTIR. They also have Jake Allen under contract for next season and could give Cayden Primeau another try between the pipes if Price can’t play.

Speaking of the Rangers, one of their fans was arrested and charged with two counts of assault, two counts of disorderly conduct and two counts of harassment after sucker-punching a Lightning fan in Madison Square Garden following Game 5 and then punching another fan who attempted to stop him from fleeing the arena. Garden officials condemned the incident and banned the fan from all their venues for life.

SPECTOR’S NOTE: At some point in that guy’s life, somebody probably warned him that his temper would get him into trouble…

THE ATHLETIC: Sean McIndoe looked at several theories regarding why Canadian teams haven’t won the Stanley Cup since 1993.

SPECTOR’S NOTE: I have two that didn’t appear on McIndoe’s otherwise solid list.

First, Canadian clubs are outnumbered by a much larger margin of American teams than they were during the Stanley Cup glory years of the Montreal Canadiens, Toronto Maple Leafs, Edmonton Oilers and Calgary Flames. That makes it more difficult to build and maintain a Cup contender.

The other is all seven of the current Canadian teams have also suffered the consequences of mismanagement since 1993. Sometimes, those decisions were based on the misguided view that their fans wouldn’t support a rebuild. Others were due to meddling ownership, inexperience or just poor judgment.

← NHL Rumor Mill - June 10, 2022 NHL Rumor Mill - June 11, 2022 →
We use cookies on our website to give you the most relevant experience by remembering your preferences and repeat visits. By clicking “Accept”, you consent to the use of ALL the cookies.
Do not sell my personal information.
Cookie SettingsAccept
Manage consent