Check out the latest speculation on the Hurricanes and Blues offseason plans in today’s NHL rumor mill. 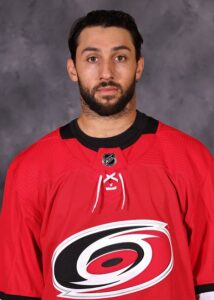 Wyshynski observed that Trocheck tends to be inconsistent. DeAngelo, meanwhile, led their defensemen with 51 points in 64 games after signing a one-year, $1 million contract.

THE NEWS & OBSERVER: Chip Alexander pointed out that Necas’ erratic third NHL season raises questions over where he fits into the Hurricanes’ plans. Bear, meanwhile, was a healthy scratch throughout this postseason.

Luke DeCock also weighed in on the difficult decisions facing Hurricanes general manager Don Waddell, with what to do with DeAngelo and Niederreiter topping the list. He felt Trocheck’s departure via free agency and cutting bait with Necas should be easier. DeCock also noted coach Rod Brind’Amour’s comment about the Hurricanes lacking elite goal scorers.

THE ATHLETIC: Sara Civian suggested Waddell explore the “elite goal scorer” market this summer. She pointed out the Hurricanes lacked a scorer in the top-20 this season despite being among the NHL’s best teams. Their scoring leader was Sebastian Aho, whose 81 points placed him 30th overall in the league.

SPECTOR’S NOTE: Cap Friendly shows the Hurricanes have $19.375 million in cap space for 2022-23 with 14 players under contract. Not everyone among those key free agents will be back, especially if Waddell and team owner Tom Dundon decide to pursue a scoring forward this summer.

I think they’ll bring DeAngelo back after his bounce-back performance this season. Trading Necas could be a mistake but he could be packaged with a draft pick or prospect to land a more established scorer.

STLTODAY.COM: Jim Thomas reports Blues GM Doug Armstrong doesn’t believe his roster needs major changes after falling in the second round to the Colorado Avalanche. With a number of key players under contract, he felt his team is in a good position for next season.

THE ATHLETIC: Jeremy Rutherford reported Perron said he’d love to be back with the Blues, though he declined to speak about his contract situation publicly. Armstrong also indicated he’d like to bring the 34-year-old winger back, citing his ability to still elevate his play despite his age.

Blues captain Ryan O’Reilly can sign a contract extension this summer. He said he absolutely wants to remain in St. Louis.

SPECTOR’S NOTE: Perron earned $4 million annually on his current contract and could return for the same cap hit on a two- or three-year deal. Leddy was a good fit with the Blues after joining them in a late-season trade. However, the 31-year-old defenseman will have to accept a pay cut from his $5.5 million to stick in St. Louis.

Husso made just $700k this season so he’s going to get a significant raise despite his postseason struggles. He could cash in on the free-agent market if he wants more playing time as a starter.

Tarasenko hasn’t publicly said he’s changed his mind about a trade but I’d say Armstrong’s comments are a strong indication he won’t be shopped this summer.

← NHL Morning Coffee Headlines - June 1, 2022 NHL Morning Coffee Headlines - June 2, 2022 →
We use cookies on our website to give you the most relevant experience by remembering your preferences and repeat visits. By clicking “Accept”, you consent to the use of ALL the cookies.
Do not sell my personal information.
Cookie SettingsAccept
Manage consent