UPDATES ON BRATT AND SUBBAN

NHL WATCHER: recently cited Sportsnet’s Elliotte Friedman and Jeff Marek discussing the contract negotiations between the New Jersey Devils and restricted free agent winger Jesper Bratt. His talks on his last contract were “really tough” and both sides are gearing up for another difficult round of negotiations. 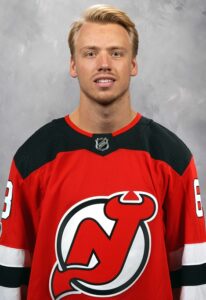 Marek raised the possibility of Bratt being targeted by a rival club with an offer sheet. Friedman doubted that will happen, pointing to the Devils carrying $25 million in cap space.

SPECTOR’S NOTE:  NJ.com’s Ryan Novozinsky has reported both sides are engaged in ongoing contract talks. Bratt has arbitration rights this summer giving him the leverage he didn’t have in his previous negotiations.

The Devils could listen to trade offers for Bratt if those talks stall or appear headed to arbitration to resolve. I don’t doubt recent reports claiming there are several teams interested in the 23-year-old winger following his career-high 73 points this season. Nevertheless, I think both sides want to get a deal done here.

Friedman’s right when he said an offer sheet wouldn’t make any sense here. The Devils can easily match, making it a pointless exercise. Since the salary-cap era began in 2005, only 10 players have signed offer sheets. Of those, only two (Dustin Penner and Jesperi Kotkaniemi) were successfully signed away.

Simpson noted Subban is a skilled right-handed shot who could be motivated with a new club and could be had at an extreme discount. However, he doubted the Canucks will be interested, pointing out the decline in the 33-year-old’s performance. His acquisition would also go against management’s intention of building up a youthful core of talent.

SPECTOR’S NOTE: It’ll be interesting to see how free agency unfolds for Subban. He’s not expected to be re-signed by the Devils and could find his market options limited because of his declining skills. I think a team in need of some experienced blueline depth will sign him to an affordable one-year contract.

WILL THE FLYERS MOVE VAN RIEMSDYK?

SPECTOR’S NOTE: van Riemsdyk has a year left on his contract with an annual average value of $7 million but an actual salary of $5 million. The 6’3”, 217-pound winger also lacks no-trade protection, giving the Flyers a wide range of potential trade partners.

Now 33, van Riemsdyk is in decline. Nevertheless, he still managed to score 24 goals on the offensively anemic Flyers, marking the seventh time in his 13 NHL seasons he’s reached or exceeded the 20-goal plateau.

A playoff contender could be interested in a big veteran scorer such as van Riemsdyk. However, that contract could be difficult to move given his age and cap hit. The Flyers might have to retain salary, include a sweetener like a draft pick or prospect, or take back a comparable contract.

HURRICANES GIVE BEAR PERMISSION TO SPEAK TO OTHER CLUBS

SPORTSNET’s Elliotte Friedman tweeted on Monday that the Carolina Hurricanes have given Ethan Bear permission to speak to other clubs. They still wish to sign the restricted free agent defenseman but they’re not close to an agreement. Friedman also noted nothing can take place before July 13 with the Hurricanes’ permission.

SPECTOR’S NOTE: Bear struggled this season with the Hurricanes and seemed to fall out of favor with head coach Rod Brind’Amour. He was a healthy scratch during the Canes’ playoff run. The 24-year-old is completing a two-year, $4 million contract and has arbitration rights.

← NHL Morning Coffee Headlines - June 21, 2022 NHL Morning Coffee Headlines - June 22, 2022 →
We use cookies on our website to give you the most relevant experience by remembering your preferences and repeat visits. By clicking “Accept”, you consent to the use of ALL the cookies.
Do not sell my personal information.
Cookie SettingsAccept
Manage consent