The latest roundup of Penguins speculation plus a look at potential trade candidates on the Panthers and Coyotes in today’s NHL rumor mill.

PITTSBURGH HOCKEY NOW: Dan Kingerski predicts the Penguins and pending free agent center Evgeni Malkin could meet “more than halfway” on a new contract that keeps him in Pittsburgh for two seasons at $7 million annually. 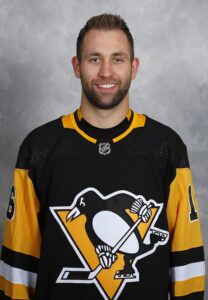 However, he expects UFA defenseman Kris Letang will get a four-year deal worth an annual average value of $9 million somewhere else.

SPECTOR’S NOTE: Letang has said he wants to finish his career in Pittsburgh with Crosby and Malkin. If he’s seeking a big-money raise, however, this season will have been his last in a Penguins jersey.

SPECTOR’S NOTE: I’ll be surprised if Kapanen or DeSmith return with the Penguins next season. They could decide not to qualify Kapanen’s rights if they can’t find anyone willing to acquire him via trade. Fleury returning to Pittsburgh to finish his career would be a great story but I don’t think we’re going to see it happen if general manager Ron Hextall has faith in Tristan Jarry as their starter.

SPECTOR’S NOTE: A trade-deadline acquisition, Rakell fit in well with the Penguins and has expressed a willingness to return. Whether they can reach common ground on a deal remains to be seen. Much will depend on what happens with Malkin and Letang.

PITTSBURGH POST-GAZETTE: Matt Vensel looked at the Penguins’ potential options for Jason Zucker. The 30-year-old winger has a year remaining on his contract worth $5.5 million and has battled injuries in recent years.

The Penguins could attempt to move Zucker in a cost-cutting deal but his contract would be considered a negative trade asset around the league unless they throw in a prospect or draft pick. They could also try to swap him for a comparable veteran forward and hope the latter will be a better fit in Pittsburgh.

A contract buyout could be another option as it would shave $3.5 million from their books for next season. However, they could be prevented from doing so if he’s still considered injured when the buyout period rolls around.

SPECTOR’S NOTE: Another option is that Hextall sticks with Zucker and considers other cost-cutting options. There’s been speculation suggesting he could shed some salary by shopping a defenseman such as John Marino or Marcus Pettersson.

POTENTIAL TRADE CANDIDATES AMONG THE PANTHERS AND COYOTES

He noted there was some social media buzz suggesting the Panthers move Sergei Bobrovsky. However, the 32-year-old goaltender’s $10 million annual cap hit and full no-movement clause for the next two seasons make him a tough trade.

Players who could be easier to move include Patric Hornqvist (one season remaining at $5.3 million), Sam Bennett (two seasons at $4.4 million per) and Radko Gudas (one season, $2.5 million).

SPECTOR’S NOTE: I’ve learned in this business not to dismiss out of hand the possibility of a high-salaried veteran with full no-trade protection getting traded. Yes, Bobrovsky could be shopped this summer. However, finding a trade partner willing to take on his full cap hit for the next four years when the salary cap is only rising by $1 million this summer makes him difficult to move.

They could find some takers for Hornqvist or Gudas but Bennett would be the more enticing trade candidate. The 25-year-old is a versatile two-way forward coming off a career-best 28-goal, 49-point performance with a reputation for elevating his game in the postseason.

Those factors would also make Panthers GM Bill Zito reluctant to part with Bennett. He might not have much choice if he’s pressed to free up cap room for next season.

Topping the list is defenseman Jakob Chychrun, who’s been the subject of trade speculation for most of this season. GM Bill Armstrong could seek a return of multiple draft picks and a top prospect.

SPECTOR’S NOTE: Armstrong reportedly set a high asking price for Chychrun during this season. He’s not expected to lower it during this offseason.

Defenseman Shayne Gostisbehere’s trade value may have improved following his 14-goal, 51-point performance this season. He’s set to become a UFA next summer. Restricted free agent forward Lawson Crouse could also have some trade value after reaching 20 goals this season.

SPECTOR’S NOTE: Gostisbehere’s solid bounce-back performance was among the few bright spots for the offensively anemic Coyotes this season. Contenders seeking a puck-moving blueliner could come calling. Unless Crouse’s contract demands are unreasonable I expect the Coyotes will re-sign him.

← NHL Morning Coffee Headlines - June 4, 2022 NHL Morning Coffee Headlines - June 5, 2022 →
We use cookies on our website to give you the most relevant experience by remembering your preferences and repeat visits. By clicking “Accept”, you consent to the use of ALL the cookies.
Do not sell my personal information.
Cookie SettingsAccept
Manage consent