Bruins coach Jim Montgomery on his training camp plans, Andre Burakovsky hoping for a larger role with the Kraken, the Rangers Sammy Blais is looking forward to a bounce-back season, and more in today’s NHL Morning Coffee Headlines.

THE BOSTON GLOBE: Jim Montgomery outlines his training-camp plans for the Bruins this season in an interview with Matt Porter. He’ll be replacing Bruce Cassidy, who was fired in June. 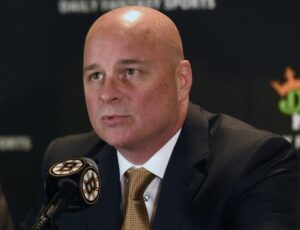 Montgomery intends to shake up his forward lines to see who plays well with others. With first-line winger Brad Marchand sidelined to start the season, he’ll have Jake DeBrusk and new Bruin Pavel Zacha skating with center Patrice Bergeron.

The second line would see recently-returned David Krejci centering Taylor Hall and David Pastrnak. Charlie Coyle will be centering the third line with wingers such as Trent Frederic, Craig Smith, Nick Foligno or Zacha once Marchand returns to the line. If Foligno skates on the fourth line, Montgomery expects him to lead that line.

With defensemen Charlie McAvoy and Matt Grzelcyk sidelined for the start of the season, Montgomery intends to use Hampus Lindholm in a leadership role along with Brandon Carlo. He’ll have to mix and match his second and third defense pairings. The new Bruins coach isn’t concerned about the goalie tandem of Linus Ullmark and Jeremy Swayman, noting how well they worked together last season.

SPECTOR’S NOTE: How well the Bruins adjust to the absence of core players like Marchand and McAvoy will determine the course of their season. The additions of Krejci and Zacha to their forward lines could be critical to the club’s early-season performance.

WASHINGTON HOCKEY NOW: Andre Burakovsky hopes to get the opportunity to become a regular top-six forward with the Seattle Kraken. The 27-year-old winger felt he never got that chance with his two previous clubs, the Washington Capitals and Colorado Avalanche. He signed a five-year deal with the Kraken last month as an unrestricted free agent.

SPECTOR’S NOTE: The Kraken are coming off their expansion season and need as much depth as they can get. Burakovsky should be among their top-six wingers along with Jaden Schwartz, Jordan Eberle, Oliver Bjorkstrand, Jared McCann and Ryan Donato.

NEW YORK POST: Sammy Blais is hoping to rebound from a knee injury that sidelined him for most of last season. Acquired from the St. Louis Blues last summer, the 26-year-old winger inked a one-year, $1.525 million contract with the Rangers in June.

SPECTOR’S NOTE: Blais could fill the third-line right wing position with the Rangers to start the season. A strong bounce-back performance on his part would provide a boost to their checking lines.

FLORIDA HOCKEY NOW: Panthers winger Carter Verhaeghe was the Grand Marshall of the Coke Zero Sugar 400 at Daytona International Speedway on Sunday. The race is part of the NASCAR Cup Series.

Allison, 24, inked a two-year contract which become a one-way deal during the second season. He’ll earn $785K at the NHL level. Hogberg, meanwhile, signed a one-year, two-way contract for $750K.

← Sunday NHL Rumor Roundup - August 28, 2022 NHL Rumor Mill - August 29, 2022 →
We use cookies on our website to give you the most relevant experience by remembering your preferences and repeat visits. By clicking “Accept”, you consent to the use of ALL the cookies.
Do not sell my personal information.
Cookie SettingsAccept
Manage consent