In the Sunday NHL Rumor Roundup: speculation over Dylan Larkin’s next contract and future with the Red Wings plus a look at the contract talks of Stars youngsters Jason Robertson and Jake Oettinger.

MLIVE.COM: Ansar Khan mused over what center Dylan Larkin’s next contract with the Detroit Red Wings could look like. The 26-year-old Wings captain is slated to become an unrestricted free agent next July. 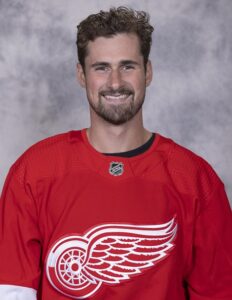 Larkin is coming off a 31-goal, 69-point performance in 71 games last season, putting him in line for a substantial raise over the $6.1 million average annual value of his current contract. That could put him in the $8 million AAV range though Khan wouldn’t be surprised if the Larkin camp was seeking $9 million.

If talks extend into the coming season, Larkin’s performance could become a factor in determining his next contract, likely an eight-year deal. However, his name could surface in the rumor mill if there’s no contract in place leading up to the 2023 NHL trade deadline.

SPECTOR’S NOTE: It could take time for Larkin’s representatives and Yzerman to hammer out an agreement. I’ll be surprised if a deal isn’t in place before the trade deadline.

Larkin is seen as a key member of the rebuilding Red Wings’ core. I think Yzerman wants to maintain some continuity within his roster, especially with homegrown talent to provide leadership to the youngsters already in the lineup and coming up from their system.

I’m not suggesting talks won’t fall apart or Larkin won’t be traded, though his full no-trade clause gives him plenty of leverage. However, I believe the two sides will get a deal done that keeps him in Detroit for the long term.

THE ATHLETIC: In his latest mailbag segment, Saad Yousuf was asked how nervous Dallas Stars fans should be about Jason Robertson and Jake Oettinger not being signed right now. The two 23-year-olds are restricted free agents coming off their entry-level contracts.

Yousuf isn’t too concerned right now though he acknowledged the snail’s pace of negotiations given the lack of urgency at this time. “There was no arbitration hearing to contend with, there’s no imminent threat of an offer sheet and there has been no requirement for players to report anywhere,” he said.

Robertson and Oettinger are team-oriented players who don’t want to miss the start of training camp. However, that becomes a possibility if negotiations remain unsolved by that point. Yousuf suggests a bridge deal for both players might be best for both sides right now, speculating Robertson could get a $7 million AAV and Oettinger coming in at $4 million.

SPECTOR’S NOTE: The threat of an offer sheet remains but I doubt Robertson or Oettinger are going to get one. That’s a rarely used tactic that has only succeeded twice in the salary-cap era. If they were to receive offer sheets it likely would’ve happened after the free-agent market opened on July 13 when most teams still had sufficient cap room.

Cap Friendly shows 13 teams already over the $82.5 million cap for the coming season with another 11 having less than $5 million in cap room. Only three teams – Anaheim Ducks, Buffalo Sabres and Arizona Coyotes – have sufficient cap space to make the type of competitive bids to successfully pry away Robertson or Oettinger. If either of those three clubs were going to make that move they would’ve done so by now.

I also don’t see any team making a robust trade offer for Robertson or Oettinger. I’m sure some general managers have called Stars GM Jim Nill to see if either guy is available but he’s probably not interested in their trade pitches. Both youngsters are already part of the Stars’ core and will take on bigger roles over the next couple of years.

The Stars have $10.3 million in cap space for 2022-23 and only Robertson and Oettinger to re-sign. They have the leverage to get those two youngsters under bridge contracts with the promise of more lucrative deals down the road, especially when aging Stars such as Jamie Benn ($9.5 million AAV) and Ryan Suter ($3.65 million) come off their books at the end of 2024-25.

← NHL Morning Coffee Headlines - August 28, 2022 NHL Morning Coffee Headlines - August 29, 2022 →
We use cookies on our website to give you the most relevant experience by remembering your preferences and repeat visits. By clicking “Accept”, you consent to the use of ALL the cookies.
Do not sell my personal information.
Cookie SettingsAccept
Manage consent