The Sabres re-sign Tage Thompson to a seven-year contract, the Penguins sign coach Mike Sullivan to a three-year contract extension, plus the latest on Nick Suzuki, Tim Stutzle and more in today’s NHL morning coffee headlines.

TSN: The Buffalo Sabres agreed to a seven-year, $50 million contract extension with Tage Thompson. The 24-year-old forward is in the final season of a three-year deal with an average annual value of $1.4 million. 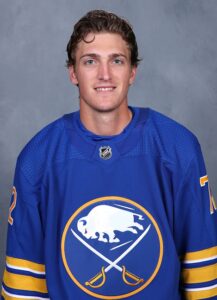 Thompson is now considered a key part of the rebuilding Sabres’ roster core. He’ll be under considerable pressure to earn that new contract but that shouldn’t be an issue if he can build upon last season’s production.

PITTSBURGH HOCKEY NOW: The Penguins signed head coach Mike Sullivan to a three-year contract extension. The new deal begins in 2023-24 and runs through 2026-27.

SPECTOR’S NOTE: Sullivan and his Penguins have struggled to regain those lofty championship heights from earlier in his tenure behind their bench. While they’ve reached the playoffs in every season since 2017, they haven’t won a playoff round since 2018.

Much of that has to do with an aging roster of talent plus cap constraints forcing some players to be moved in cost-cutting deals. Nevertheless, Sullivan faces the challenge of trying to get the Penguins back on the championship track.

MONTREAL GAZETTE: Canadiens center Nick Suzuki believes his club is going to surprise people after they finished last in the overall standings this season. He’s excited by the additions made by management during the offseason and is also looking forward to playing a full season under head coach Martin St. Louis.

“We’ve got a pretty deep team and I think people are underestimating us,” said Suzuki. “I don’t think that’s a bad thing, either. I think we’re going to surprise people.”.

The Canadiens, however, will struggle without Carey Price in goal and lack skilled top-four depth on their blueline. They’re still a rebuilding team that won’t make the 2023 playoffs but they shouldn’t be the pushovers they were through the first half of last season. I think they’ll be the up-tempo, never-quit squad we saw after St. Louis took over behind the bench in February.

In other words, they shouldn’t have much trouble scoring goals this season but will have trouble keeping pucks out of their own next.

“We want to show the fans that we’re a good team, a young team, and we can really be a lot better than we played the last two years,” he said. “We want to be in the playoffs, and I think that’s why we made the moves.”

SPECTOR’S NOTE: Stutzle isn’t the only one thinking that way. Senators fans are excited by the offseason additions and the ongoing development of budding stars such as Stutzle and Norris. A number of pundits also point to the Senators’ moves and expect big improvement this season.

SPECTOR’S NOTE: Originally a first-round pick in 2016 with the Anaheim Ducks, the 24-year-old Steel struggled to meet expectations. A fresh start with the Wild could help him get his career on track.

GOPHNX.COM: The Arizona Coyotes named Lee Stempniak as their director of player development. Stempniak, 39, spent 14 seasons as an NHL player, including two seasons with the Coyotes. He was previously their Hockey Data Strategist.