Speculation suggests the Flames might not be done in the trade market and a couple of predictions for the Oilers in today’s NHL rumor mill.

ARE THE FLAMES NOT DONE DEALING?

CALGARY HOCKEY NOW: Steve Macfarlane reports a “growing feeling” that Flames general manager Brad Treliving could make another move in the trade market. He points to preseason projections that have prospect Jakob Pelletier among the Flames’ top-six forwards plus their plethora of defensemen.

Juuso Valimaki is a popular name for trade bait while Oliver Kylington would be the kind of young defenseman who might be of greater interest to rival clubs. Noah Hanifin has only two seasons left on his contract but the Flames likely aren’t concerned about that given their “win-now” attitude. 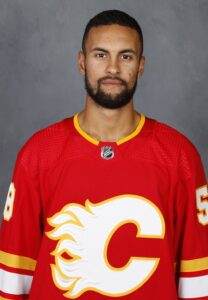 Macfarlane also noted some free-agent options such as Evan Rodrigues and Sonny Milano. He pointed out that Sportsnet’s Elliotte Friedman recently suggested the Flames had some interest in the 29-year-old Rodrigues.

SPECTOR’S NOTE: Treliving’s made some bold moves this summer such as shipping Matthew Tkachuk to Florida for Jonathan Huberdeau and MacKenzie Weegar and signing Nazem Kadri. He could have another one up his sleeve, perhaps by drawing on his blueline depth.

Cap space, however, will be a factor. With $2.1 million remaining, Treliving could be forced to make another cost-cutting trade to free up cap space as he did when he traded Sean Monahan to Montreal to make room for Kadri. The other option is a dollar-for-dollar swap. Failing that, an affordable free-agent option such as Rodrigues or Milano seems the more likely route.

TRADE PREDICTIONS FOR THE OILERS

THE ATHLETIC: Allan Mitchell made some bold Edmonton Oilers predictions for the coming season.

One of them is the expectation that the Oilers will become salary-cap compliant by placing Mike Smith and Oscar Klefbom on long-term injury reserve and making a trade. Mitchell suggested shipping out Warren Foegele for a draft pick or a non-roster player.

Mitchell also expects Oilers GM Ken Holland will make a big addition at the 2023 trade deadline. He took note of the recent speculation tying Chicago Blackhawks winger Patrick Kane to the Oilers. However, he believes they would be better off waiting until the trade deadline so as to avoid any potential cap complications that could arise over the course of the season. He also doesn’t rule out pursuing Arizona Coyotes defenseman Jakob Chychrun.

SPECTOR’S NOTE: Unless the Oilers are the only team with a genuine interest in Kane, I don’t think they can win a bidding war for his services at the trade deadline. That’s assuming the Blackhawks star will be willing to waive his no-movement clause to come to Edmonton.

Given their lack of cap space, they’ll have to pull off a three-team trade to spread Kane’s $10.5 million cap hit around. Even then, they’ll have to move a salaried player to ensure sufficient wiggle room. They’ve got some decent prospects within their system but other clubs might be able to offer better quality.

As for Chychrun, I don’t see Holland giving up two first-round picks plus a top prospect or a promising NHL player if that remains the Coyotes’ asking price on deadline day.

← NHL Morning Coffee Headlines - August 26, 2022 NHL Morning Coffee Headlines - August 27, 2022 →
We use cookies on our website to give you the most relevant experience by remembering your preferences and repeat visits. By clicking “Accept”, you consent to the use of ALL the cookies.
Do not sell my personal information.
Cookie SettingsAccept
Manage consent