The latest on Bo Horvat’s contract status with the Canucks plus an update on the Canadiens’ efforts to re-sign Kirby Dach in today’s NHL rumor mill. 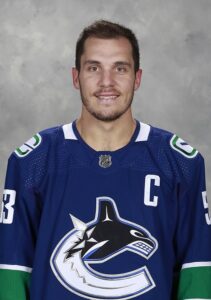 MacIntyre points out that the constraints under the salary cap could make it difficult for the Canucks to invest heavily in their top-three centers such as Miller, Horvat and Elias Pettersson. It could limit their efforts to address their need to improve their defense corps.

General manager Patrik Allvin acknowledged this but also noted that Pettersson can play on the wing. He also felt a good team needs that depth at center. “But moving forward, we need to be aware of the cap situation and potentially some roster decisions coming into next summer,” said Allvin.

MacIntyre believes it’ll be surprising if the Canucks open their season next month with Horvat still unsigned after reaching an agreement with Miller. Still, he wonders if they’ll be able to afford Pettersson when he’s due for a new contract in 2024 and how they’ll upgrade their blueline.

THE PROVINCE: Patrick Johnston also wondered if the Canucks can really afford Miller, Horvat and Pettersson.

SPECTOR’S NOTE: Allvin understands the importance of getting Horvat signed before the start of the season. “Hopefully we can figure something out here,” he said.

Miller’s new contract and an extension for Horvat won’t affect the Canucks’ salary-cap payroll for this season. However, with over $68 million invested in 14 players for 2022-23, a new deal for Horvat could push that to over $75 million, leaving little room to fill out the rest of the roster next summer.

At some point, the Canucks must free up cap space to accommodate new contracts for Horvat and Pettersson as well as address their roster weaknesses. Perhaps that means contract buyouts for Pearson and Myers next summer. Maybe it means retaining part of their salaries to facilitate a trade.

For this season, the Canucks are above the cap by $2.75 million. They should get cap relief by placing sidelined winger Micheal Ferland (concussion) and his $3.5 million AAV on long-term injury reserve. They could also attempt to a valuable player on a long-term contract such as winger Conor Garland.

ARE THE CANADIENS CLOSE TO SIGNING DACH?

TVA SPORTS: cited Sportsnet’s Elliotte Friedman speculating the Montreal Canadiens could be close to signing Kirby Dach. He believes it will be a four-year contract worth an average annual value of $3.5 million.

Friedman even suggested the Canadiens may have already reached an agreement with Dach. He felt the Habs might be trying to conclude a few things before formally announcing the new contract.

MONTREAL HOCKEY NOW: Marco D’Amico also took note of Friedman’s remarks. He pointed out it’s no secret the Canadiens have been trying to move a forward. General manager Kent Hughes recently indicated he’d like to add another defenseman.

SPECTOR’S NOTE: D’Amico noted that Mike Hoffman, Joel Armia and Christian Dvorak have been frequently mentioned as trade candidates. He believes their excess of wingers could see them try to move Hoffman or Armia.

← NHL Morning Coffee Headlines - September 7, 2022 NHL Morning Coffee Headlines - September 8, 2022 →
We use cookies on our website to give you the most relevant experience by remembering your preferences and repeat visits. By clicking “Accept”, you consent to the use of ALL the cookies.
Do not sell my personal information.
Cookie SettingsAccept
Manage consent