Brad Marchand is practicing with the Bruins, Wild goalie Marc-Andre Fleury acknowledges his poor start, Matt Murray’s injury could have a silver lining for the Leafs, and more in today’s NHL Morning Coffee Headlines.

SPECTOR’S NOTE: The NHL didn’t schedule any games for Sunday, Oct. 17, 2022, so no game recaps this morning.

BOSTON HOCKEY NOW: Brad Marchand returned to practice with his Bruins teammates for the first time since undergoing double hip surgery in May. The 34-year-old winger was a full participant in a light on-ice practice Sunday. “I feel really good. Today was more of a mental victory than anything, “ said Marchand. “It’s been a long four months.” 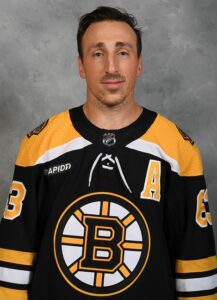 SPECTOR’S NOTE: Marchand is expected to return to action around the American Thanksgiving long weekend in late November. He’ll be participating in morning skates with his teammates for the time being.

Speaking of the Bruins, they recalled defenseman Dan Renouf. That move suggests Brandon Carlo could be sidelined for a while with an upper-body injury suffered on Saturday against the Arizona Coyotes.

TWINCITIES.COM: Marc-Andre Fleury acknowledged his poor start to this season and admitted he has to improve his play. The 37-year-old goaltender gave up 11 goals on 49 shots over his first two games and was booed off the ice by Wild fans during their 7-6 loss to the Los Angeles Kings on Saturday. “I don’t blame them; I’d boo myself,” said Fleury. “I was not good. I feel bad for the fans. I feel bad for my teammates.”

SPECTOR’S NOTE: The Wild signed Fleury to a two-year contract and handed him the starter’s job after trading Cam Talbot to the Ottawa Senators. He’s at a point in his career where age could be catching up with him. If so, the Wild could be in serious trouble between the pipes this season.

TORONTO SUN: Michael Traikos suggests losing goalie Matt Murray for four weeks to an adductor injury could be the best thing that could’ve happened to the Maple Leafs. With Murray on long-term injured reserve, it provided them with the salary-cap wiggle room to recall Wayne Simmonds, Nick Robertson and Victor Mete.

This situation gives them an opportunity to fully evaluate Ilya Samsonov in the starter’s job. It also provides the club with a much-needed kick in the pants after they seemed to sleep-walk through their first two games of the season.

SPECTOR’S NOTE: The more important factor is Samsonov’s performance. If he proves up to the challenge as a starting goaltender, the Leafs will be fine. Their season could depend on it.

NEW YORK POST: Sammy Blais returns to the Rangers lineup tonight against the Anaheim Ducks. It’s his first NHL regular-season game since suffering a season-ending knee injury last November. An upper-body injury suffered during preseason play kept him out of the lineup through the Rangers’ first three games of this season.

NHLPA released a statement on Saturday after the NHL announced it was closing its investigation into allegations of sexual assault and grooming leveled at Tampa Bay Lightning defenseman Ian Cole due to lack of evidence.

The NHLPA has issued a statement regarding the NHL’s recent investigation. pic.twitter.com/Ee3eOWNGmD

ST. LOUIS POST-DISPATCH: Tyler Pitlick is still skating in practice with the St. Louis Blues despite being released from his professional tryout offer last week. He could earn a contract with the club with Logan Brown looking like he’ll be headed to injured reserve.

THE PROVINCE: It appears Tucker Poolman could be sidelined longer than anticipated as the Vancouver Canucks recalled Noah Juulsen. Poolman was injured during the Canucks 3-2 loss on Saturday to the Philadelphia Flyers.

NEW YORK POST: Larry Brooks suggests the NHL and NHLPA should reach an agreement at the end of this season to spread the anticipated $9.5 million increase in the salary cap in 2024-25 and 2025-26 over the next three seasons. It would provide an annual cap increase of $3 million in each season, giving some much-needed cap relief to a number of teams next season.

SPECTOR’S NOTE: Brooks points to a number of teams forced to ice reduced rosters already this season due to constraints brought about by the flattened salary cap. It will rise by just $1 million for next season before jumping by a projected $4.5 million in 2024-25 and another $4 million in 2025-26.

Cap Friendly indicates 13 teams are at or above this season’s $82.5 million cap with another four clubs carrying under $250K in cap room. That makes it difficult for those clubs to ice full rosters or call up replacements from the minors if injuries strike. It could become a problem over the course of the season and perhaps prompt some team owners to call upon the league for some form of cap relief of the kind suggested by Brooks.

The argument can be made that it’s the fault of those teams for overspending on talent. However, some of those big contracts were signed several years ago before the COVID-19 pandemic flattened hockey-related revenues in 2019-20 and 2020-21, freezing the cap over the past two seasons and leading to marginal increases for this season and the next.

Those contracts were signed with the understanding that the cap would continue rising based on the annual projections from league headquarters. No one expected a global pandemic that led to shortened schedules and significantly reduced revenue nor can they be faulted for that lack of foresight.

← Sunday NHL Rumor Roundup - October 16, 2022 NHL Rumor Mill - October 17, 2022 →
We use cookies on our website to give you the most relevant experience by remembering your preferences and repeat visits. By clicking “Accept”, you consent to the use of ALL the cookies.
Do not sell my personal information.
Cookie SettingsAccept
Manage consent