NHL.COM: Alex DeBrincat scored twice, including the winner in overtime, as the Ottawa Senators overcame a 4-2 deficit to defeat the Montreal Canadiens 5-4. Those goals were DeBrincat’s first with the Senators since being acquired from the Chicago Blackhawks in July. 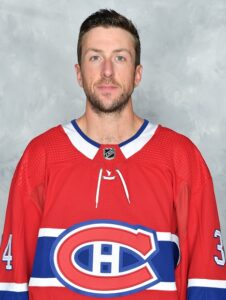 Speaking of the Canadiens, they signed Jake Allen to a two-year contract extension.

Allen told reporters he’s happy to stay with the Canadiens and help them with their rebuilding program. He sees himself as a mentor to goalies Cayden Primeau and Sam Montembeault.

And speaking of the Senators, goaltender Cam Talbot missed this game with an undisclosed injury. He’s listed as day-to-day and isn’t expected to be sidelined for long.

WINNIPEG SUN: The Jets unveiled a statue honoring the late Hall-of-Famer Dale Hawerchuk prior to Saturday’s preseason game against the Edmonton Oilers. Hawerchuk was drafted by the original Jets in 1981 and spent nine seasons with the club, becoming one of the greatest players in franchise history. He died of stomach cancer in 2020.

Two goals by Brent Burns (including the game-winner) enabled the Carolina Hurricanes to nip the Florida Panthers 4-3. Burns was acquired from the San Jose Sharks in July.

BOSTON HOCKEY NOW: Taylor Hall and Fabian Lysell suffered minor injuries during the Boston Bruins’ 4-0 preseason victory over the Philadelphia Flyers. They’re expected to be sidelined for only one or two days.

NBC SPORTS PHILADELPHIA: As for the Flyers, their injury woes continue as goaltender Felix Sandstrom left the game with a lower-body injury. Starter Carter Hart is currently out with an injury but is expected to be ready for the Flyers’ season-opener on Oct. 13.

DAILY FACEOFF: The Carolina Hurricanes signed Calvin de Haan to a one-year, one-way, $850K contract. The 31-year-old defenseman had been in camp on a professional tryout offer.

THE SEATTLE TIMES: The Kraken unveiled Buoy, a blue scraggly sea-troll as their new mascot.

NHL.COM: Dominik Zrim is among several new hirings by the San Jose Sharks. Zrim founded the website CapFriendly in 2015 and becomes the Sharks’ director of salary cap management/CBA compliance.