Some Canadian teams could be in the market for a defenseman. So could the Columbus Blue Jackets. Find out why in today’s NHL Rumor Mill.

TSN: In Tuesday’s “Insider Trading” segment, Darren Dreger said there’s a “growing list of Canadian teams” that are in the market for a defenseman. He singled out the Toronto Maple Leafs, Montreal Canadiens, Ottawa Senators, Edmonton Oilers and Vancouver Canucks. 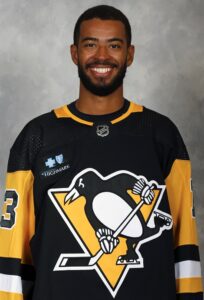 Dreger believes the Leafs and Canadiens are seeking a right-shot defenseman. He noted that Pierre-Olivier Joseph of the Pittsburgh Penguins is believed to be available. Dreger isn’t attaching Joseph to those teams but pointed out the Penguins have nine defensemen. “He’s a young player, a first-round draft pick, so he might be a fit with one of those clubs,” said Dreger.

Chris Johnston noted that Arizona Coyotes defenseman Jakob Chychrun will be joining his teammates during their current road trip in Montreal. The 24-year-old rearguard has frequently surfaced in trade rumors but he’s been recovering from offseason wrist surgery.

Johnston said there are teams interested in Chychrun but they want to see him return to action before agreeing to a deal. Dreger mentioned the blueliner is “high-rent” plus the Coyotes have set a high asking price. He wondered if some of those Canadian teams might “buckle up and pay the price” to acquire Chychrun or look elsewhere toward someone like Joseph.

THE ATHLETIC: Aaron Portzline reported on Oct. 16 that defensive woes were among the reasons for the Columbus Blue Jackets’ early-season struggles. He felt general manager Jarmo Kekalainen might have to trade for a right-shot defenseman to “change the makeup on the blue line.”

SPECTOR’S NOTE: Cap space will also be a factor for most of those Canadian teams mentioned by Dreger as well as for the Blue Jackets. The Senators are the only club that could have enough room to absorb Chychrun’s $4.6 million average annual value.

I don’t believe the Coyotes will retain any portion of that. He’s signed through 2024-25 and they probably don’t want to carry any dead cap space for that long.

Joseph isn’t an established defenseman like Chychrun but he has potential plus he also carries a very affordable $825K AAV through 2023-24. He was rumored to be available earlier this month as the Penguins sought to become cap compliant before the start of the season. They achieved that goal by demoting Ty Smith and Mark Friedman to their AHL affiliate.

The Penguins could move Joseph if they get a tantalizing offer. For now, I think they’re willing to stick with him and see how his game develops. He has two assists in three games thus far this season.

It’s worth noting that Chychrun and Joseph both shoot left so they won’t address the needs of those clubs looking for a right-shot rearguard.

← NHL Morning Coffee Headlines - October 19, 2022 NHL Morning Coffee Headlines - October 20, 2022 →
We use cookies on our website to give you the most relevant experience by remembering your preferences and repeat visits. By clicking “Accept”, you consent to the use of ALL the cookies.
Do not sell my personal information.
Cookie SettingsAccept
Manage consent