Should the Leafs dangle Nick Robertson as trade bait for Jakob Chychrun? Could the Panthers pursue a replacement for the sidelined Aaron Ekblad in the trade market? Find out in today’s NHL Rumor Mill.

SHOULD THE LEAFS OFFER ROBERTSON TO THE COYOTES FOR CHYCRUN?

TORONTO SUN: Michael Traikos suggests the Maple Leafs should trade promising Nick Robertson to the Arizona Coyotes for Jakob Chychrun. The 21-year-old forward had an impressive season debut against the Dallas Stars on Thursday night with two goals, the second coming in overtime following his smart defensive play to thwart a Stars’ two-on-one scoring opportunity. 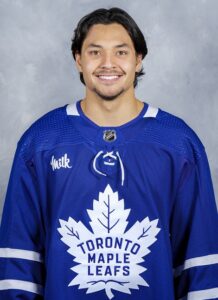 Traikos acknowledges Robertson’s potential as a top-six forward but believes the Leafs already possess enough depth in that department. They need to bolster their blueline and Chychrun would do that. He’s also 24 and carries an affordable $4.6 million cap hit through 2024-25.

Chychrun has asked to be traded to a contender and Traikos believes the Leafs could be at the top of the list, They have the pieces to get a deal done plus they’re in “win-now” mode.

With Chychrun close to returning from offseason wrist surgery, Traikos suggested the Leafs offer up a package of Robertson and their 2023 first-round pick as part of it. He also proposed including Alex Kerfoot and his $3.5 million cap hit in the deal to free up the necessary salary-cap space if sidelined defenseman Jake Muzzin returns to the lineup later this season.

SPECTOR’S NOTE: Traikos makes a good point regarding the Leafs’ defense. If they were to pursue Chychrun, the Coyotes could agree to accept Robertson as part of the return. However, I don’t think they’ll want Kerfoot in the deal given his eligibility for unrestricted free-agent status next July.

General manager Bill Armstrong reportedly seeks a return heavy with future assets like first-round picks, top prospects or good young NHL players like Robertson. Kerfoot doesn’t fit into any of those categories. Armstrong could agree to take him in the deal if the Leafs also include prospect Matthew Knies, which would be folly on the Leafs’ part.

WILL THE PANTHER SHOP FOR A REPLACEMENT FOR EKBLAD?

DAILY FACEOFF: During Friday’s “Ice Breakers” segment, Mike McKenna asked Frank Seravalli if the Florida Panthers are going to bring in some reinforcements on their blueliner with top defenseman Aaron Ekblad sidelined for several months.

Seravalli thinks the Panthers are shopping around but only for affordable temporary stopgaps. There are not many younger players available who could slide into their lineup.

The Pittsburgh Penguins’ Pierre-Olivier Joseph has come up in the rumor mill. Seravalli said he knows “a number of teams” have made offers for the 23-year-old blueliner but the Penguins weren’t or aren’t willing to move on from him.

Jakob Chychrun requested a trade from the Arizona Coyotes but Seravalli doesn’t see the Panthers pursuing the 24-year-old rearguard. They don’t have a lot of future assets to part with plus the cap-strapped club must ensure they have sufficient cap space when Ekblad returns to the lineup later this season.

SPECTOR’S NOTE: The Panthers could bring in a defenseman like Chychrun on a dollar-in, dollar-out deal where they send a player with a comparable salary the other way. They could also attempt a three-team deal to spread around the cap hit of the incoming player.

Neither option, however, seems likely at this stage of the season. Like other cap-strapped clubs with a core player sidelined for weeks or months (like the Colorado Avalanche with captain Gabriel Landeskog on the shelf), the Panthers will have to gut it out until those players return.

← NHL Morning Coffee Headlines - October 22, 2022 NHL Morning Coffee Headlines - October 23, 2022 →
We use cookies on our website to give you the most relevant experience by remembering your preferences and repeat visits. By clicking “Accept”, you consent to the use of ALL the cookies.
Do not sell my personal information.
Cookie SettingsAccept
Manage consent