Questions facing the Canucks and the Islanders as they stumble from the gate in today’s NHL Rumor Mill.

THE ATHLETIC: Harman Dayal pondered several options as to what Vancouver Canucks management will do to address the club’s poor start to this season.

One could be making an early-season trade. Those tend to be risky but Canucks president of hockey operations Jim Rutherford had success with such moves in his previous job as general manager of the Pittsburgh Penguins. 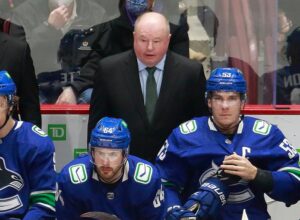 Dayal admits these Canucks face too many problems to be resolved with just one trade. While shopping Bo Horvat or Conor Garland for a top-four defenseman signed beyond this season sounds good in theory but if such an opportunity were available it would’ve happened by now.

Another option could be replacing Bruce Boudreau as head coach. During an interview with Hockey Night in Canada last Saturday, Rutherford indicated the club had a bad training camp, poor habits and a lack of structure. However, the Canucks are already paying former head coach Travis Green for this season and could be reluctant to add Boudreau to that list.

SPECTOR’S NOTE: The Canucks are a mess. Granted, they’ve had defensive issues since last season but they look nothing like the club that staged an impressive second-half turnaround following Boudreau’s takeover.

Dayal got the impression from Rutherford’s HNiC interview that he’ll remain patient despite the issues he pointed out. However, he also felt Rutherford’s patience could only last so long.

Replacing Boudreau would be easier than making a trade with so many teams carrying little or no salary cap space to start this season. Boudreau was inherited by Rutherford, who could prefer bringing in his own guy if things don’t soon improve regardless of the financial implications.

I’m not calling for the Canucks to fire Boudreau. It would be, as Dayal suggested, that they’re just not a good team. Still, that move could be the easiest route for Rutherford if he feels changes are needed fast.

THE HOCKEY NEWS: Adam Proteau believes the New York Islanders still have plenty of time this season to qualify for the playoffs but their disappointing start could lead to changes if they don’t reverse their fortunes.

If the Islanders’ performance doesn’t improve, Proteau wondered how many teams could start lining up to take players under contract beyond next season off GM Lou Lamoriello’s hands. He also pondered if Lamoriello might use some draft picks to acquire impact players or how long the Isles GM will continue to wait to make a significant move.

SPECTOR’S NOTE: Lamoriello replaced Barry Trotz as head coach with Lane Lambert plus he tried and failed to land a scoring forward this summer to bolster the Isles’ anemic offense. Still, apart from acquiring defenseman Alexander Romanov, he mostly stuck with the same roster he had last season, betting they would bounce back from what was a difficult 2021-22 campaign.

So far, there’s no indication the Islanders are poised for a rebound performance this season. Like the Canucks, Lamoriello would also face a difficult time making a significant trade with so many clubs in salary-cap hell to start the season.

← NHL Morning Coffee Headlines - October 25, 2022 NHL Morning Coffee Headlines - October 26, 2022 →
We use cookies on our website to give you the most relevant experience by remembering your preferences and repeat visits. By clicking “Accept”, you consent to the use of ALL the cookies.
Do not sell my personal information.
Cookie SettingsAccept
Manage consent