NHL.COM: Hockey Hall-of-Famer and former Toronto Maple Leafs defenseman Borje Salming passed away from amyotrophic lateral sclerosis (ALS) on Thursday at age 71. He was diagnosed with the incurable disease in April but only revealed the diagnosis in August. 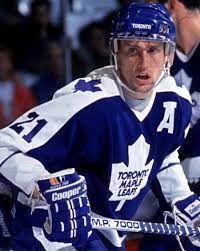 Salming blazed a trail for European players to reach the NHL. Joining the Maple Leafs in 1973-74, the Swedish defenseman went on to play 16 seasons in Toronto, becoming their all-time points leader among blueliners (768).

He was a finalist for the Norris Trophy four times, named to the NHL First All-Star Team in 1976-77 and to the Second All-Star Team five times. He played one season with the Detroit Red Wings before returning to his native Sweden to finish his playing career.

Earlier this month, Salming returned to Toronto for the Hall-of-Fame weekend, where he received two standing ovations from Leafs fans.

SPECTOR’S NOTE: Salming belongs with Bobby Orr, Denis Potvin, Larry Robinson and Brad Park among the top defensemen of the 1970s. He was the greatest blueliner in Leafs’ history and a true inspiration for European players hoping to join the NHL.

Salming was so beloved by Toronto fans that he received a standing ovation at Maple Leaf Garden during the 1976 Canada Cup tournament when he was introduced as part of Sweden’s starting lineup for a game against Team Canada.

THE ATHLETIC: Patrick Marleau revealed to Kevin Kurz that he had a difficult time adjusting to retirement when his 23-year NHL playing career came to an end in 2021. It even became difficult for him to watch the game on television as the reality that his career was over began to sink in before he officially announced his retirement in May 2022.

Marleau and his family have since relocated to Florida to help further the hockey career of his son, Landon. He also accepted an invitation from the San Jose Sharks to work with prospects at their development camp this past summer.

Marleau is now working as an assistant coach to head coach (and former NHL teammate) Shawn Heins in the under-16 AAA Florida Alliance program. He is also the head coach of the under-12 team, on which his son Jagger plays.

SPECTOR’S NOTE: Best wishes to Marleau in his new career. Perhaps we’ll one day see him return to the NHL as a coach.

THE NEWS & OBSERVER: The Carolina Hurricanes are struggling to score this season, managing just 18 goals in his last nine games and a league-worst shooting percentage of 7.7.

SPECTOR’S NOTE: The Hurricanes last season were ninth overall in goals-per-game average (3.38). This season, they’re 27th at 2.70. Losing top-line winger Teuvo Teravainen to injury is a contributing factor as is the absence of offseason acquisition of winger Max Pacioretty. Losing center Vincent Trocheck to free agency may be another factor. The eventual return of Teravainen and Pacioretty’s debut later this season should boost their production. They’ll need it if they hope to stage a serious run for the Stanley Cup next spring.

TSN: The Minnesota Wild have activated goaltender Marc-Andre Fleury off injured reserve ahead of this afternoon’s game against the Toronto Maple Leafs.

Speaking of the Leafs, Jordie Benn joins fellow defensemen Jake Muzzin, Morgan Rielly and TJ Brodie on the sidelines as he’s week-to-week with an upper-body injury. Don’t expect to see recently-acquired Conor Timmins in this game as the Leafs want to give him some time to get settled.

TWIN CITIES.COM: Speaking of the Wild, general manager Bill Guerin is considering his options for struggling rookie center Marco Rossi, who’s been held scoreless in 16 games and was a healthy scratch in the Wild’s last two contests. One of those options is sending him to their AHL affiliate in Iowa to regain his confidence and scoring touch.

SPECTOR’S NOTE: Rossi is a highly-touted young forward who was considered among this season’s potential candidates for the Calder Memorial Trophy as NHL rookie of the year. He won’t improve his play by sitting in the press box.

COLORADO HOCKEY NOW: Avalanche forward Evan Rodrigues is to miss this afternoon’s game against the Nashville Predators as a precautionary measure. He suffered a lower-body injury during Wednesday’s game against the Vancouver Canucks.

SPECTOR’S NOTE: A condition of the sale is the Senators cannot be relocated to another city. One reason why there’s so much interest is the potential to construct a new arena near downtown Ottawa. The report noted that the new venue could boost the franchise’s value, which was recently calculated at $655 million.