Check out the latest Canadiens speculation plus a look at some other potential blueline trade targets for the Leafs in today’s NHL Rumor Mill. 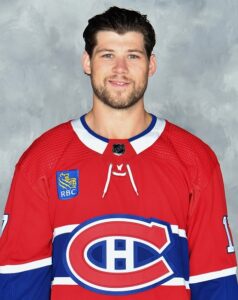 Marinaro wonders if the Devils would part with a promising youngster such as Luke Hughes, Simon Nemec or Alexander Holtz in a package deal. It remains to be seen if Canadiens GM Kent Hughes (no relation to Luke or Devils winger Jack Hughes) would be willing to move Anderson.

SPECTOR’S NOTE: Marinaro also claims there are a couple of teams besides the Devils who would take Anderson. Assuming the Canadiens are willing to move him, they probably aren’t in any rush to do so at this stage in the season.

If there is interest in Anderson, it might be best to wait until the March 3 trade deadline approaches to start considering serious offers. His value in the trade market could be much higher by that point.

D’Amico noted TSN’s Pierre LeBrun recently linked Monahan to the Colorado Avalanche, who could be among several clubs that will be in the market for a second-line center. Edmundson has apparently been the subject of conversations between Hughes and his peers, while the recent improvement of Dvorak could bolster his trade value.

Speaking of Anderson, D’Amico speculated the Calgary Flames and Edmonton Oilers could present irresistible offers to Hughes at some point.

SPECTOR’S NOTE: I believe Monahan, Edmundson or Dvorak could be moved before Anderson. Much will depend on where the Canadiens are in the standings leading up to the March 3 trade deadline and what the market is for those players. Given the plethora of defensemen the Canadiens are carrying, maybe Edmundson gets traded first.

MONTREAL GAZETTE: Stu Cowan reports the Canadiens possess a logjam of defensemen with Mike Matheson’s recent return from injury and the rise of promising blueliners like Kaiden Guhle, Jordan Harris, Arber Xhekaj and Johnathan Kovacevic. He also noted there were 19 scouts at Tuesday’s game between the Canadiens and Buffalo Sabres.

SPECTOR’S NOTE: Some of those scouts would’ve been there simply because their teams will be playing the Canadiens or Sabres in the near future. However, I daresay some could be there to check out some potential trade bait.

LIST OF POTENTIAL BLUELINE TRADE TARGETS FOR THE LEAFS

THE SCORE: Sean O’Leary recently published a list of 10 defensemen the Toronto Maple Leafs could target to bolster their injury-ravaged blueline.

SPECTOR’S NOTE: O’Leary’s list came out before the Leafs acquired promising rearguard Conor Timmins from the Arizona Coyotes on Nov. 23. However, they could perhaps pursue one of his suggested trade targets if Timmins doesn’t pan out or if Morgan Rielly, Jake Muzzin and TJ Brodie are sidelined longer than expected.

SPECTOR’S NOTE: As I’ve mentioned before, I don’t see Orlov, Dumba, Severson and Soucy going anywhere as long as their respective teams remain in playoff contention. Gavrikov could be shopped if he hasn’t signed a contract extension before the trade deadline. Schenn will likely become available if the Canucks fail to gain ground in the standings.

Notable defensemen with term remaining on their contracts include the Arizona Coyotes’ Jakob Chychrun, the Boston Bruins’ Mike Reilly and Matt Roy and Sean Walker of the Los Angeles Kings.

SPECTOR’S NOTE: The high asking price for Chychrun is likely too rich for the Leafs. Reilly could be a good option but the Bruins may be reluctant to trade him to a division rival. Leafs general manager Kyle Dubas has a trade history with Kings GM Rob Blake so perhaps Roy or Walker would be more likely options here.

← NHL Morning Coffee Headlines - November 24, 2022 NHL Morning Coffee Headlines - November 25, 2022 →
We use cookies on our website to give you the most relevant experience by remembering your preferences and repeat visits. By clicking “Accept”, you consent to the use of ALL the cookies.
Do not sell my personal information.
Cookie SettingsAccept
Manage consent