The Kraken keep rising in the standings, the Canucks are clawing their way back into playoff contention, plus the latest on Panthers captain Aleksander Barkov and more in today’s NHL Morning Coffee Headlines.

NHL.COM: An overtime goal by Daniel Sprong lifted the Seattle Kraken to a 5-4 victory over the Anaheim Ducks. Matty Beniers had a goal and two assists for the Kraken (13-5-3) as they pick up their fifth straight win. Mason McTavish and Adam Henrique scored in the third period for Anaheim to force overtime as their record falls to 6-15-1). Ducks forward Trevor Zegras collected three assists. 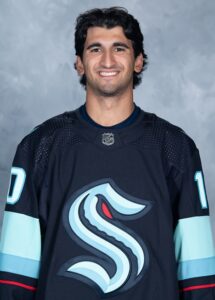 SPECTOR’S NOTE: With the win, the Kraken moves one point ahead of the Dallas Stars for second place in the Western Conference standings with 29 points. Beniers leads all NHL rookies this season with 18 points. Meanwhile, Ducks goaltender John Gibson left the game in the third period with an undisclosed injury.

SPECTOR’S NOTE: The Canucks have overcome a poor start to this season. With 21 points, they’re one point out of a wildcard berth in the Western Conference. Kuzmenko’s been a key part of that improvement. After netting just two points in his first seven NHL games, he now has 19 points in his last 14 contests, including two game-winning goals.

The Winnipeg Jets thumped the Chicago Blackhawks 7-2. Pierre-Luc Dubois and Saku Maenalanen each scored twice while Kyle Connor and Josh Morrissey each had three-point performances as the Jets improved to 13-6-1. Taylor Raddysh and Jujhar Khaira replied for the Blackhawks (6-11-4) as their winless skid reached seven games.

SPECTOR’S NOTE: Since their 4-2-0 start, the Blackhawks have won only twice in their last 15 games. Jets forward Morgan Barron collected an assist as he returned to action for the first time since being sidelined by an injury on Oct. 30. With 27 points, the Jets are fourth in the Western Conference.

Minnesota Wild winger Kirill Kaprizov had a goal and two assists as his club held off the Arizona Coyotes by a score of 4-3. Joel Eriksson Ek collected two assists for the Wild (10-9-2) while Matias Macelli also picked up two assists as the Coyotes slid to 7-10-3.

SPECTOR’S NOTE: Macelli sits second among this season’s rookie scorers with 13 points but he’s their leader in assists with 12.

The Ottawa Senators downed the Los Angeles Kings 3-2 on an overtime by Claude Giroux. Brady Tkachuk, Tim Stutzle and Thomas Chabot each had two points as the Senators boosted their record to 8-12-1. Arthur Kaliyev scored both goals for the Kings (12-9-3) as they’ve dropped four of their last five contests.

SPECTOR’S NOTE: This was a big win for the struggling Senators as they salvage four points from this four-game western road trip.

FLORIDA HOCKEY NOW: Panthers captain Aleksander Barkov will be sidelined for the next two games with a non-COVID-related illness.

WGR 550: The Buffalo Sabres placed forward Riley Sheahan on unconditional waivers for the purpose of terminating his contract after he declined to report to their AHL affiliate in Rochester.

DAILY FACEOFF: Former Canucks coaching staff member Rachel Doerrie filed a complaint with the British Columbia Human Rights Tribunal last week. She alleges she was discriminated against by the team and assistant general manager Emilie Castonguay for her mental and physical disabilities.

Doerrie, who has PTSD and a heart condition, was hired by the Canucks in January as an analyst and promoted to the coaching staff on Aug. 1. She indicated she had revealed her medical conditions to Canucks president of hockey operations Jim Rutherford during the hiring process. She was terminated from her position in September.

← Sunday NHL Rumor Roundup - November 27, 2022 NHL Rumor Mill - November 28, 2022 →
We use cookies on our website to give you the most relevant experience by remembering your preferences and repeat visits. By clicking “Accept”, you consent to the use of ALL the cookies.
Do not sell my personal information.
Cookie SettingsAccept
Manage consent