Recaps of Tuesday’s action, the three stars of the week are revealed, Canucks president Jim Rutherford remains unhappy with his club’s performance, and more in today’s NHL Morning Coffee Headlines.

NHL.COM: Four power-play goals enabled the Washington Capitals to hold off the Edmonton Oilers 5-4. Evgeni Kuznetsov scored twice and collected two assists while Dylan Strome scored twice for the Capitals as their record improves to 6-6-2. Connor McDavid had a goal and an assist in his 500th career NHL game while Ryan Nugent-Hopkins scored twice as the Oilers fell to 7-6-0 after losing three straight games. 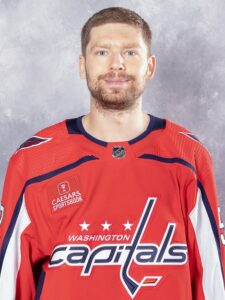 SPECTOR’S NOTE: It was a milestone game for Capitals coach Peter Laviolette. He picked up his 723rd career victory to move into eighth place on the all-time wins list for NHL head coaches.

An overtime goal by Noah Dobson completed a three-goal comeback by the New York Islanders in a 4-3 victory over the Calgary Flames. Two unanswered third-period goals by Anders Lee and Kyle Palmieri set the stage for Dobson’s winner while Ilya Sorokin kicked out 43 shots for the 8-5-0 Islanders. Mikael Backlund scored twice for the Flames as they dropped to 5-4-2.

SPECTOR’S NOTE: It was a costly win for the Islanders as Cal Clutterbuck left the game in the first period with an undisclosed injury.

THE PROVINCE: Vancouver Canucks president of hockey operations Jim Rutherford continues to voice his unhappiness with his club’s performance following a 3-6-3 start to the season. He once again indicated he doesn’t like how the team’s system is set up and the players’ work ethic stretching back to training camp.

Rutherford resisted an opportunity to endorse head coach Bruce Boudreau. He also said he expected more accountability from the players.

SPECTOR’S NOTE: Things are getting ugly for the Canucks. Boudreau was hired before Rutherford, who indicated he thought the coach’s contract was only for the end of last season. The deal in fact had a mutual option year which both sides agreed to but Rutherford appears to have regrets about that decision.

I’ll have more about the Canucks in today’s Rumors update.

OTTAWA SUN: Senators center Josh Norris got some good news as it turns out he won’t require surgery on his injured shoulder. There’s no timeline for his return to action but he will be re-evaluated in January.

THE ATHLETIC: Speaking of the Senators, general manager Pierre Dorion gave a vote of confidence to head coach D.J. Smith. The club is mired in a five-game losing skid but Dorion insists he has no plans to replace Smith.

Dorion also indicated there’s nothing new to report regarding contract negotiations with Alex Formenton. The 23-year-old restricted free agent has until Dec. 1 to sign a new contract with the Senators or become ineligible to play for the remainder of this season.

SPECTOR’S NOTE: There’s been speculation that the reason Formenton remains unsigned is his ties to the 2018 Canadian World Junior team currently being investigated over accusations that several players sexually assaulted a young woman. So far, there is nothing to indicate Formenton had any involvement in this case.

STARTRIBUNE.COM: Minnesota Wild winger Jordan Greenway (shoulder) has been activated off injured reserve and will return to action for Tuesday’s game against the Los Angeles Kings.

THE PHILADELPHIA INQUIRER: The Flyers will don their classic Cooperalls for warmups as they debut their reverse retro jerseys.